Identical Twins Give Birth to Rainbow Babies at the Same Hospital, on the Same Day

Back in November, a pair of identical twins went into labor right around the same time–and even managed to give birth just two hours apart!

It’s an amazing coincidence, but was makes the event so remarkable is the fact that the 23-year-old twins, Bao Kou Julie Yang and Bao Nhia Julia Yang, had both suffered miscarriages before conceiving these children. This, as sad as it may be, makes their newborns rainbow babies; and very special ones at that!

In an interview with People, the sisters remember the amazing day when they both checked into the hospital a week early to have their babies.“We both weren’t expecting this, to say the very least,” Bao Kou said. “I was definitely in shock, but I was happy for the both of us. It’s really a miracle.”

As mentioned, the circumstances surrounding the births truly are rare. Both Bao Kou and Boa Nhia had both lost babies beforehand, which made this day even more emotional for the two. Luckily for the pair though, they have had each other’s backs through the good times and the bad.

“My sister and I went through miscarriages together and that definitely brought us closer,” Bao Kou said. “Being able to see her, being able to have her be there and keeping me together after our miscarriages was something that was very important to me.”

Of course, these tragic situations are anything but ideal, but it must have been comforting for these sisters to know that they had one another through such trying times. Bao Kou says that, because they had been through hell and back together, she and her sister were able to solidify their bond even more.

“We were just feeling a lot of love and care for each other. We’ve gone through a lot,” Bao Kou continued. “We definitely were there for each other and we both reminded each other that no matter what happened, we were always going to have each other.”

They have each other but now they also have two beautiful baby girls who–hopefully–will be just as tight as the identical twin moms.

“They seem to get along with each other. They fall asleep next to each other fine. They cry at the same time,” Bao Kou said of the babies. “I think that me and Julia will try our best to ensure that our children know what a close bond she and I have. Hopefully they will get to share that as well.” 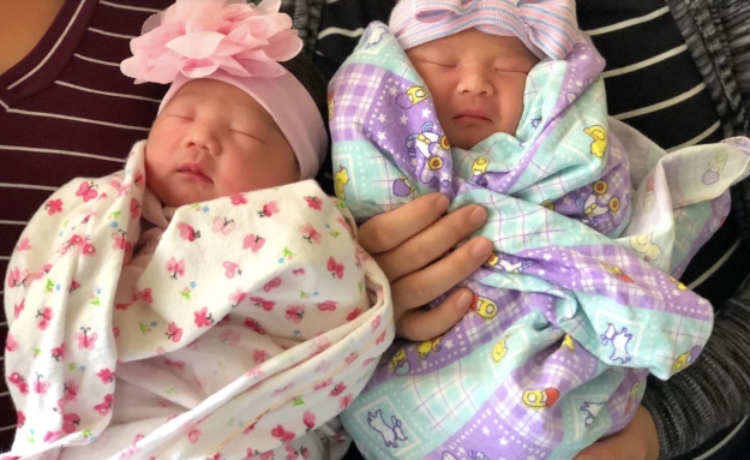 Unsurprisingly, the birth wasn’t just a big deal for Bao Kou and Bao Nhia, it was also a pretty monumental event for the hospital, Community Regional Medical Center in Fresno. It shared an image of the moms and the newborns on the Facebook page, writing:

That’s a heartwarming story if we’ve ever heard one! How wonderful is it that these two twin moms are now having the chance to raise these beautiful baby girls together. What a dream!

We’d love to hear your thoughts on this sweet story. Are you surprised that these twins gave birth on the same day? Do you know of any similar stories? What’s the most amazing birth story you’ve ever heard?