We all hear stories of monsters—sorry, mothers—in-law…whether it’s her showing up unexpectedly at your house or telling you how to raise your own child. Sure, some people have mothers-in-law they get along with, but the stereotype always tends to them being a crazy person.

Well meet Amy Pennza, who has the mother-in-law story of the century. She recently posted a photo on Twitter telling the world how her mother-in-law showed up at her wedding wearing a wedding dress.

That’s right—her mother-in-law had the audacity to show up dressed just like the bride, in a white, shiny wedding gown!

If you’re unaware, there are many rules when it comes to weddings—and wearing white as a guest, let alone a wedding dress, is highly frowned upon.

We know what you’re thinking: Did she kick her out? Are Amy and her husband together anymore? Was there bloodshed? Don’t worry, Twitter had a lot of questions, too. Everyone asked her what the heck happens after an immediate family member shows up in such a garment. This stuff doesn’t happen very often, after all.

The entire Twitter world went aghast and began to tweet Amy to give more background about what happened after that fateful day. And it’s an ending you might not quite expect. 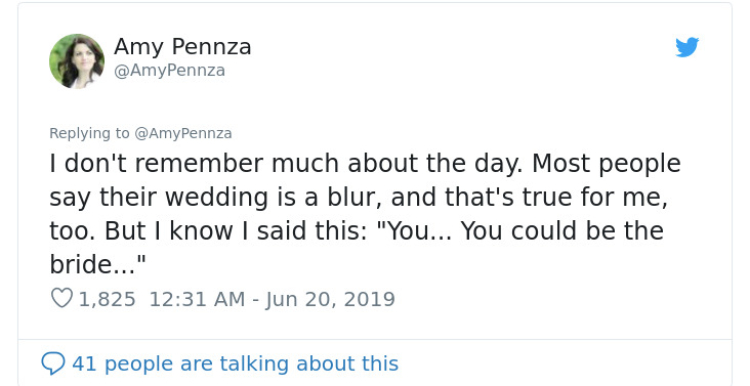 It turns out that Amy’s mother-in-law is a total bargain hunter. And we don’t just mean she uses a 50-cent coupon on tuna here and there—we mean she goes through every length to save a penny.

“For example, she takes the olives and celery out of a Bloody Mary and saves them for salads,” Amy explained in her tweets. “She once walked casually to the table where I was eating a subway sandwich and put my discarded cold cuts in a baggie because ‘someone will eat them.’”

That’s just the half of it. Amy explains that her mother-in-law has done countless other things to save money, including keeping a plastic water bottle in her purse to fill up with water at restaurants.

“She grew up in extreme poverty,” Amy tweeted. “As a child, she used to sneak into the kitchen and eat match heads. When you grow up with nothing, it stays with you. Forever, I think.”

It makes sense that when Amy’s mother-in-law found the dress at such a good price, she couldn’t turn it down.

Amy isn’t mad about it at all. Sure, she was a little shocked when she showed up in like that on her wedding day, but she says her mother-in-law feels terrible about it now, even though they can both laugh about it.

Amy goes on in her tweets about how, though frugal, her mother-in-law is “incredibly generous,” helping out when her babies were newborns and regularly showing up with clothes and gifts for them. She even once hemmed her work pants so Amy could look nice on her first day of work.

“Sure, she wore a wedding dress to my wedding,” concludes. “But she has more than made up for it since.”

Was that a twist or what? Such a sweet story.

What’s the craziest thing your mother-in-law has ever done? Did you forgive her?