There are two very distinct things that little girls do: 1. They watch Disney movies and envy the princesses that marry the prince and live happily ever after, and 2. They fantasize about how they’d like their future husband to propose to them one day.

Well, one woman recently got to combine both of those things when she was proposed to by her very own Prince Charming while watching their own rendition of her favorite Disney movie.

The unforgettable moment began when Sthuthi David, a cardiologist, went to the theater with her boyfriend, filmmaker and medical resident, Lee Loechler.

What she didn’t know was that the theater was filled with all of her family and friends awaiting what would soon be Sthuti’s dream proposal (or any little girl’s for that matter).

It turns out that Lee spent six months working with an Australian illustrator to get himself and Sthuthi animated into the viewing of “Sleeping Beauty.”

It was no easy task, that’s for sure. “A lot of illustrators said no, that it was too big, or they had too long of a waitlist, or that they had too much going on already,” Lee said.

But then he discovered an illustrator named Kayla Coombs on Instagram, who specializes in couple’s portraits in a somewhat Disney aesthetic. Luckily, she was excited to make Lee’s idea into a reality! 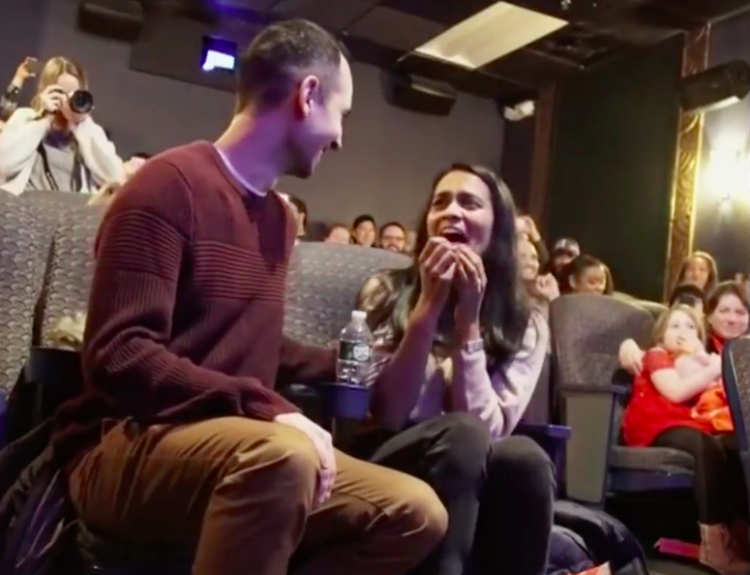 But that wasn’t the end of Lee’s work. He called up the Coolidge Corner Theatre in Massachusetts, explaining his elaborate plan, and asking if he could rent out a screening room. Of course, they said yes.

Lee knew that Sthuti would’ve thought something was fishy if he himself invited her to a viewing of Sleeping Beauty, so he had to get creative. He sent a fake email with a fake announcement of the viewing to Sthuthi’s mother, who then emailed her daughter informing her that she bought tickets. She even slyly squeezed in how she bought Lee a ticket too, just in case he wanted to go.

“Much to my delight, she called me a few days later and invited me to her own surprise proposal,” Lee said.

That’s not all. Lee then reached out to local strangers via Reddit to see if anyone would come to fill the theater as “extras” so that she Sthuthi wouldn’t notice her family in the back of the theater.

The proposal began during the scene when Prince Phillip wakes Princess Aurora with a kiss. Suddenly, the characters change into ones that amazingly look just like Lee and Sthuthi. Suddenly, Prince Phillip, aka the animated version of Lee, “throws” Lee the ring through the screen, which Loechler pretended to catch. And with that, he got down on one knee in front of his extremely shocked almost-fiancé and proposed in the sweetest way.

“It’s not every day you get to propose to your High School sweetheart,” Lee said. “The only thing better than seeing the smartest person I know completely dumbfounded was knowing we’d get to live happily ever after together.”

To see Lee’s proposal, check out the video below.

Are you crying yet? Could this proposal be any sweeter? What’s your dream proposal?