It’s every mom’s dream to one day be a grandmother, but that doesn’t necessarily mean that always comes easy for everyone.

Cecile Eledge couldn’t wait for her son Matthew to have a child. There was only one small problem: Matthew married a man named Elliot Dougherty, so getting pregnant naturally wasn’t quite on the radar.

However, as Matthew and Elliot began to look into (expensive, timely) surrogate options, Cecile had an idea. What if she became the surrogate to her son and son-in-law’s child? Yes, that’s right—carry her own grandchild.

At first, the two thought she was a bit coo-coo. After all, at 61 years old, was it even possible? They jokingly brought it up during a meeting with their doctor, Dr. Carolyn Maud Doherty, who actually thought it was a pretty good idea—and that it was very possible indeed.

After doing some testing, it was determined that Cecile was indeed healthy enough to carry a child to full term.

“She’s 61 years old and has lower blood pressure than the rest of us,” Matthew said. “When they made her run on a treadmill, even when it was turned up to the highest level, she wasn’t anywhere close to the danger zone.”

Cecile’s good health truly paid off when she managed to get pregnant from the very first embryo transfer—not an easy task for even some young moms to be. 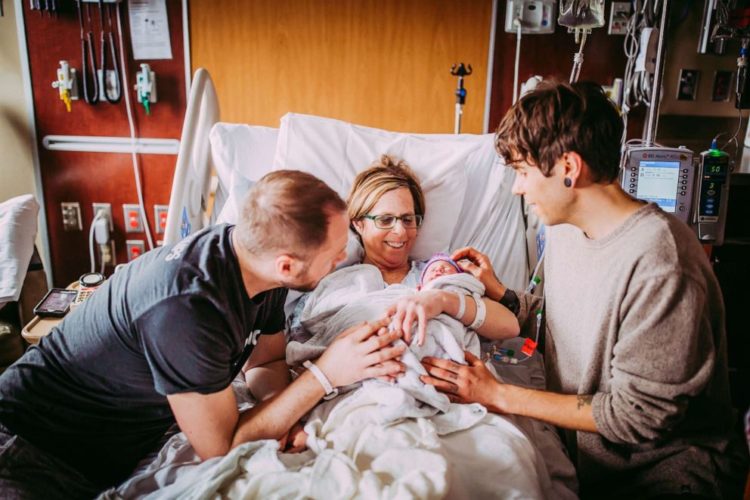 To keep the whole affair even more in the family, the egg was donated by Elliot’s sister Lea Yribe. The egg was then fertilized with Matthew’s sperm.

Cecile’s pregnancy evolved with little complications, but just because the end of the road was easy, doesn’t mean the beginning was. First off, Nebraska, where the couple lives, had banned same-sex couples from fostering children at all. And when they were looking into IVF, they felt defeated because of how expensive it was and weren’t even sure if they could afford to have a baby after all.

It wasn’t covered under their insurance and were quoted about $40,000 just on IVF alone. “And that’s literally the cheapest it could have been,” said Matthew.

Matthew and Elliot did still have to pay for the egg retrieval and transfer, which cost them about $12,000. Also, because Uma wasn’t Cecile’s biological baby, insurance wouldn’t cover any costs associated with Cecile carrying and birthing the baby, so they had to front that too. Still, they saved tens of thousands of dollars for donated eggs, since Lea donated them for free.

“I do think it’s sad that IVF as a process is exclusive to those who can afford it,” Matthew said. “And for queer couples, it’s a particular challenge.”

Matthew and Elliot feel extremely lucky to have such a healthy, happy baby. “Seeing her — it’s so hard to explain. I just want to stare at her,” Matthew said. “I think I lost it when I realized she’s no longer a thought, an idea. She’s here! We did this. We all did this together.”

To hear more on this incredible story, check out the video below.

What do you think of this story? Do you know of any couple in a similar situation? Would you ever let a family member carry a child for you?