It’s not uncommon for places have their own dress codes—from schools to offices and all the buildings in between. And if someone who enters that building is wearing something that doesn’t abide by those dress codes, they may suffer some consequences.

Charisha Raylee Gobin was recently one of those sufferers.

You see, Gobin is over seven months pregnant with twins. And one Saturday evening, she was craving a good old steak. Understandable, right? She and her mother and sister decided to have dinner at a local steakhouse called the Buzz Inn in Marysville, Washington.

Well the steakhouse had other plans. They took one look at Gobin and told her they couldn’t serve her.

It all came down to the outfit she was wearing. Gobin had decided to put on a crop top and a skirt that night, which is a pretty normal outfit to go out to a restaurant in. In fact, with it being a hot summer night, she wanted to feel comfortable and maybe even let her skin breathe a bit.

However, being seven months pregnant, Gobin’s belly was sticking out a bit too much for the restaurant’s likings, and the wait staff couldn’t allow her to sit. When she asked for a table, they turned her away.

Why? According to the restaurant, Gobin’s outfit was in violation of the restaurant’s “no shoes, no shirt, no service policy” and also went against their “health code regulations.” 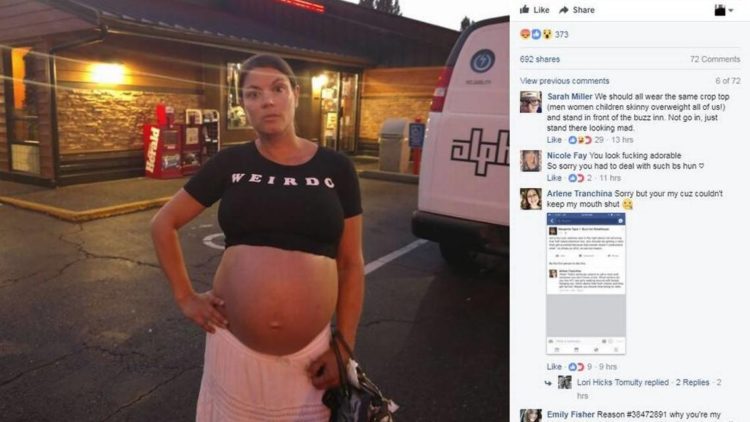 In a fit of rage, she decide to post a photo of herself in the outfit on Facebook to see what her friends thought.

“I was just denied service at the Buzz Inn on State Avenue in Marysville for my outfit. I’m violating the health code,” she wrote, with three thumbs up emojis.

The post has since racked up hundreds of views—and opinions.

After posting the photo on Facebook, the Buzz Inn responded with a statement on their own Facebook page:

“We sincerely apologize for the misunderstanding and will cover with all staff as to how to not overly enforce a rule that is intended to make all guests feel comfortable. The server in question has been with our company and a great employee for almost 20 years and was trying to use her best judgment and by no means was trying to be demeaning to the guest. Again our sincere apology for misunderstanding.”

To hear from newscasters, as well as some of the opinions of others who responded to Gobin’s Facebook post, check out the video below.


We’d love to hear your thoughts! What do you think of this story? Do you think Gobin should’ve been allowed to eat at the restaurant, or were they right in denying her service? How would you have reacted if this happened to you? Do you know anyone else something like this has happened to?