You know the feeling—you get to your favorite restaurant and order your favorite dish. You’re STARVING and can’t wait to dig in. When it arrives at your table, your eyes go wide and your mouth drools. You taking heaping forkfuls, chomping bite after bite, enjoying the dish even more than the last time.

But then after a while, you start to get full. Like, you literally couldn’t eat another bite of it if you tried. You’re so stuffed that you ask for the rest of it to-go. But then, something happens. The waitress asks you if you’re interested in seeing a dessert menu…and suddenly, you think you can make room in that distended belly.

Ever think about why it is that you might not able to have another bite of dinner, but you can always make room for dessert? It’s not just you—there’s actually science behind why people can always eat dessert, even if they thought they were super full after dinner.

In an experiment conducted by Vox, people were served a heaping portion of mac and cheese. They were then told to stop eating when they were full. Simple, right?

The participants were pretty excited about it—who doesn’t love mac and cheese? After they ate their desired portion, they realized they couldn’t stomach any more. But then, they were served a second course: Another helping of mac and cheese. 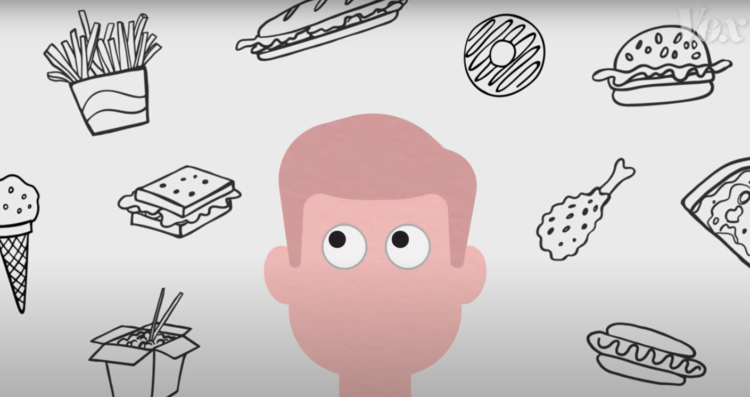 Who wants mac and cheese directly after eating mac and cheese? They weren’t exactly thrilled with the repetitive choice of meals, but they proceeded to try and eat whatever they could stomach (as you can imagine, most of them ate very little).

The ladies and gents were then invited back to participate in a similar experiment, only this time, after eating their big portion of mac and cheese, they were served a bowl of vanilla ice cream to top I toff, instead of a second helping of mac and cheese.

This time, they were a lot happier. And the results were pretty fascinating. The participants were able to eat much more of the ice cream (even though they claimed they were full) than they did of the second helping of mac and cheese the first time (even though they were equally full).

The answer for why this is lies in a fancy phrase called “sensory specific satiety.” This phenomenon puts forth the idea that we may think we’re full, but in fact, we may just not want to eat any more of what’s in front of us—but we MAY want to eat something ELSE. Hence, why a second plate of mac and cheese doesn’t sound appetizing after the first, but a bowl of ice cream does.

It’s really all very fascinating! To learn all about sensory specific satiety and see the experiment in full, check out the video below.

Are you someone who always wants dessert after dinner? Have you ever wondered why that is even though you felt full? The more you know!