CMS Wire, @UnBassador via Twitter
For most people, when we visit a restaurant, we expect to pay for our food. That’s what’s expected. That’s why there are prices for the food and beverages the restaurants serve.

An influencer is basically someone who has a huge social media following and uses that following to influence, you know, promote stuff on various social media platforms.

Should these people get things for free? Maybe. If someone has thousands or millions of followers, and if their followers might be interested in a certain product, it would probably make sense to give an influencer a product in exchange for social media exposure. These items could be home products, clothing, shoes, baby products, etc.

My family has a restaurant on a Greek island. We receive dozens of messages like these every year:

“I’m an influencer, can I come and eat in exchange for posting a photo of your restaurant on instagram?”

The poster went on to post screenshots of a conversation with one of these influencers. 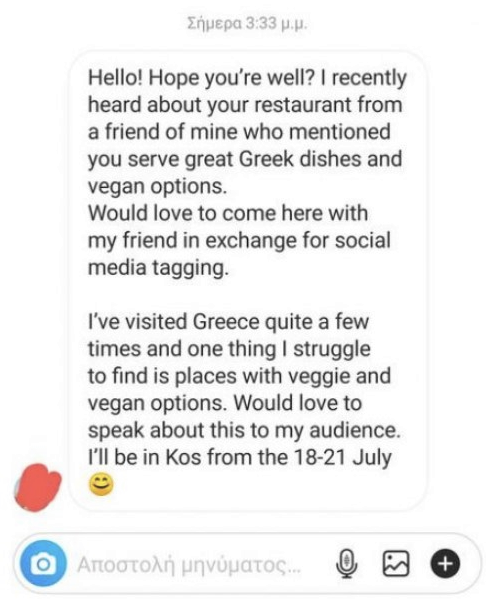 The restaurant’s owners have come up with a very creative (and pretty awesome) way to say “no” to these influencers. Basically, they tell the influencer he or she will need to pay for the meal as usual, but in exchange, the restaurant will donate a meal of equal value to someone in need.

For the last 3 years I have been responding with the following:

“thank you very much, however our restaurant has a policy. We charge every influencer who wants to eat here normally, however we offer food of equal value to people in need instead.” 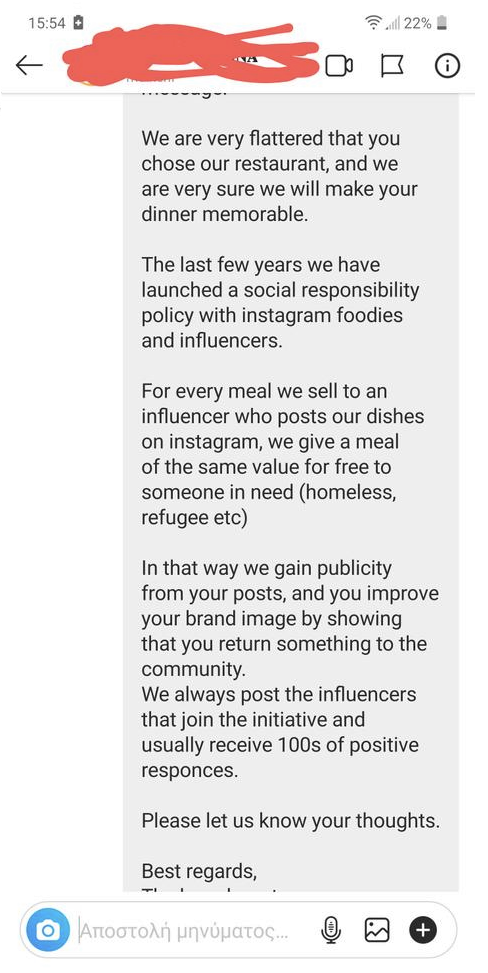 None of the influencers have taken the restaurant up on this offer. Kinda makes you think twice about the values of these so-called influencers, doesn’t it?

There is no reason to believe that the people contacting this restaurant really are even influencers. Their social media following could be fake or full of people who would not even be interested in something like visiting this restaurant in Greece.

What do you think of this restaurant’s creative approach to saying “no” to influencers?