If you’re a mom, you know you can’t leave your kids alone for more than one second. Take your eyes off of them, and in just moments they dug into the knife drawer or are walking around with a box of tampons. It’s truly remarkable how quickly kids can get into mischief, isn’t it?

Mom of three Stephanie Plucknette had just walked away from her children for just a moment to take a shower, and all hell broke loose. When she got back, she couldn’t believe her eyes. And when it finally hit her what had happened, she burst into tears.

It was her five-year-old Teddy, who had decided to grab some clippers and not only shave part of his head, but his siblings’ hair, Eloise, 3, and Fred, 2, as well.

“I did about 100 other things in the day and then took a brief shower,” Stephanie said “I was gone literally eight minutes. I came out and Teddy was holding the shaver and was like ‘Mom, look what I did.'”

Stephanie had completely forgotten that she had left the clippers outside after shaving the dog earlier in the day. And in those less than 10 minutes, Teddy had shaved off a huge chunk of his own hair, the entire back portion of Eloise’s hair, and some of Fred’s as well.

When Stephanie saw what had happened, she was in total shock. “My first reaction was ‘No, no, no’ and I started crying,” Stephanie said. When she called her husband, “He first asked who died,” she said, [And then] he assured me it was just hair and it would grow. He’s always the calming force and voice of reason.” 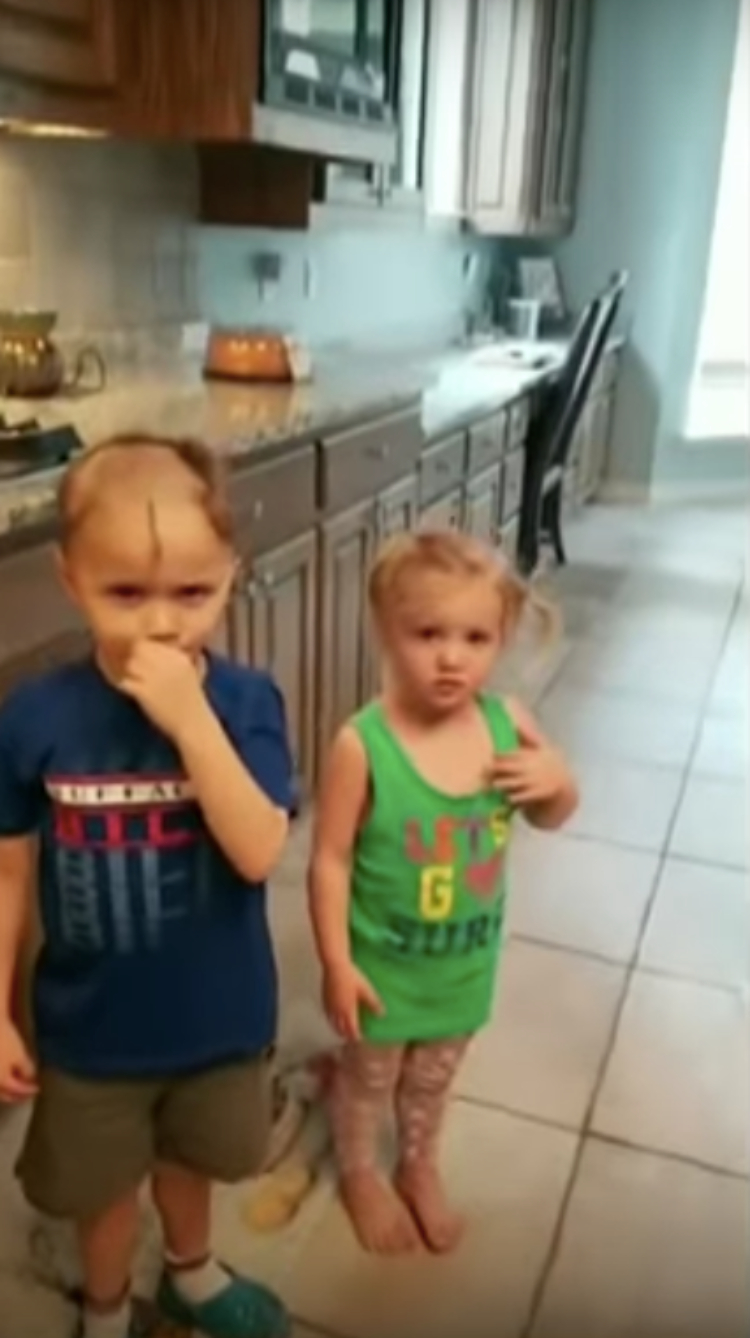 Her second reaction was to grab the camera so that she could show her friends and family what had happened. She even decided to post the clip to her Instagram page (once she was able to realize it wasn’t the worst thing in the world).

In the video, you can tell that Teddy is so innocently proud of himself for giving his siblings “haircuts” and Eloise tells Stephanie that she doesn’t like her haircut. It’s truly the sweetest, funniest thing amid a pretty chaotic moment.

Well, Stephanie’s family found the video so amusing that her younger brother posted the video to his Twitter, which is when it really began to take off.

“It was too funny not to put out there,” her brother said. “I personally wouldn’t think to get out my phone and record, but she did and it just took off. It’s crazy.”

The post racked up thousands of likes, comments, and shares—so much so that it even got to Jimmy Kimmel, who couldn’t get enough of the little shaved kiddos. In fact, he loved the video so much that he invited the family to appear on his show Jimmy Kimmel Live! so that he could publicly set the record straight about what went on in those moments Stephanie was in the shower.

To see the hilarious, adorable interview with Kimmel and the Plucknette family, check out the video below!

How adorable are these kids? Have your kids ever done something like this before?