We have to admit, people are getting really creative about how they spend their time quarantined in their home. You have people making up workouts you can do with merely soap to running marathons on their balcony.

But there’s also people doing things for the greater good and just generally trying to help out where they can. And that doesn’t always mean far-reaching gestures like donating 100,000 free burritos to health care workers, like Chipotle is doing. Sometimes it’s just a small act of kindness for…a squirrel.

One Pennsylvania man named Rick Kalinowski decided one day to build a picnic table for the squirrels roaming in his neighborhood. He had a bit more free time on his hands after having a halt in his work as a plumber and HVAC contractor.

The picnic table is made from mere scraps from a deck he previously built, and are the perfect size for the squirrels, who eat the food Kalinowski leaves out on top of it.

“I buy a variety of nuts and seeds for the squirrels along with fresh-cut fruit; it brings me happiness especially during these uncertain times,” he said. “The squirrels just looked so happy and cute eating.”

Once Kalinowski shared a picture of one of his handmade mini picnic tables and a squirrel eating at one, that was it. He was a viral sensation. 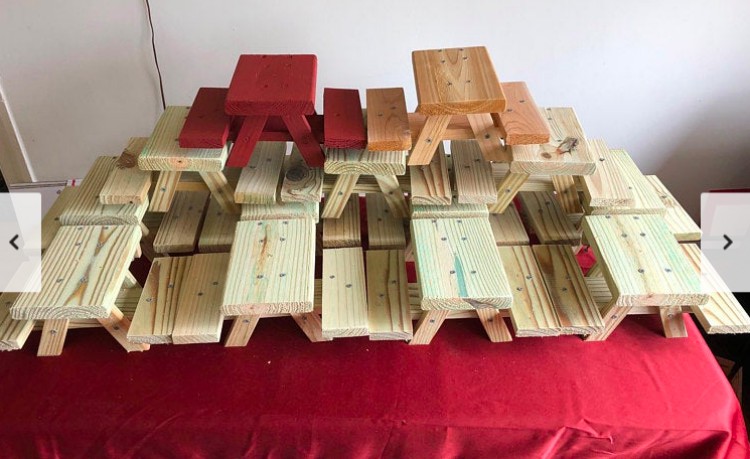 It really worked out for him, as he was able to pick up this new ‘job’ as his regular one went on a hiatus. After meeting tons of orders, he decided to set up on an online store on Etsy called Squirrelly Treasure Co., which you can find here.

In addition to selling picnic tables for squirrels, he has also begun selling DIY kits so people can make their own as well as replacement feeding bowls.

Even if people aren’t buying tables or kits directly from Kalinowski, there are tons of people who’ve proudly contacted him with pictures of tables they’ve made on their own.

Kalinowski isn’t just selling these picnic tables for a profit. He actually donated a few table plans to women’s shelters and cancer centers. That way, patients can have a bit of entertainment and joy as they get treated.

See squirrels roaming around where you live? Check out Kalinowski’s store to buy your own squirrel picnic table or kit to make your own!

How cute are these picnic tables? Do you think you’ll make or buy one?