How to Make Homemade No-Yeast Pizza in 15 Minutes

If you’re finding yourself with a boatload of free time in light of all the stay-at-home orders from the coronavirus pandemic, you’re not alone. While most people’s free time wasn’t asked for and is a result of unemployment, many are trying to make the most of it anyway. One way to do that? Cooking!

There are so many awesome recipes out there that, previously, you might not have had time to try out—you know, making bread from scratch or topping your pasta with a deliciously comforting Bolognese sauce.

These are great recipes to try, but we’re about to do you even better: Homemade pizza dough.

Before you think that sounds way too complicated, hear us out. This recipe, by Chef Gemma Stafford of the YouTube channel Bigger Bolder Baking, involves not a drop of yeast and takes no more than just 15 minutes flat to whip up. That’s right, a mere 15 minutes.

Sounds magical right? it’s so magical, in fact, that Stafford calls it a “magic pizza dough.”

All you need for the dough are some basic ingredients that you likely already have in your pantry: Flour, salt, and baking powder. After mixing that around, you’ll add some water and oil, forming a large dough ball. That’ll take you a mere five minutes flat!

In your next 10 minutes, sprinkle your counter with some flour and roll the dough out into the shape of a pizza. Remember that because the dough doesn’t have yeast in it, you may need to roll it out a bit thicker than you would’ve thought since it doesn’t rise as much in the oven. 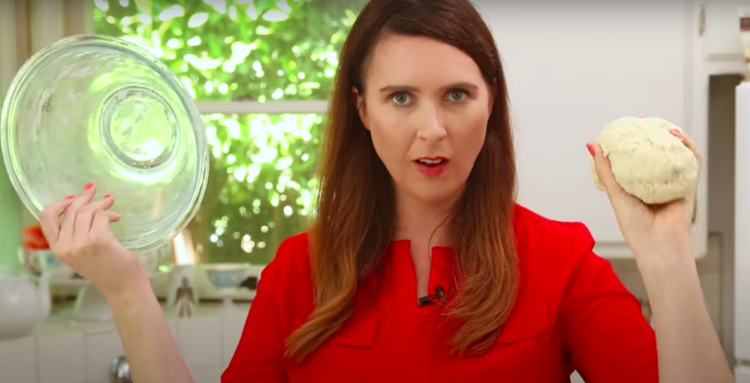 Stafford suggests rolling it into the standard pizza circle, but if it comes out a bit lopsided, don’t worry about it—it’ll still taste great!

The dough makes about a 12-inch pizza, or you can opt for making a few mini pizzas. You can also pop some of the dough into the fridge if you don’t use it all and save it for later. Once the dough is rolled out, now comes the fun part: Toppings! Of course, you can top your pizza with whatever you’d like—it’s a completely versatile up-to-you kind of recipe.

Stafford chooses the classic pepperoni, sauce and cheese combo, and pops it into the oven to bake. In just 15-17 minutes, she has a perfect bubbly pizza ready to enjoy—and you can, too!

Don’t believe us at how simple this recipe is? Watch Stafford do her thing and whip up the amazing magical no-yeast pizza in minutes below.

Have you been cooking a lot while you’ve been home more? Have you ever made homemade pizza dough before? Will you be trying out this recipe?