The coronavirus outbreak of 2020 was certainly not anything any of us expected. And while the situation is not something most people are enjoying, we have to say, there are some positives to having so much free time at home.

Lots of people have taken advantage of their extra time to pick up some new hobbies. In fact, one of the most popular ones seems to be spending more time getting creative in the kitchen. Cooking or baking was originally seen as something that took up a lot of time, and if you didn’t have that time, it could be seen as a burden. Now, it seems like the most relevant thing to do.

One of the most popular items people are baking during their quarantine? Bread!

It makes sense, right? I mean, the phrase “the best thing since sliced bread” was created for a reason—we all love the stuff. And while packaged bread great, going to the grocery store is a luxury these days, not to mention there truly is nothing like homemade bread. So it makes sense why so many people have chosen to bake themselves a loaf from scratch.

If you haven’t tried baking your own bread from scratch before—or even if you have—British Chef Jamie Oliver has come to the rescue. He has just shared the easiest recipe for how to make homemade bread. 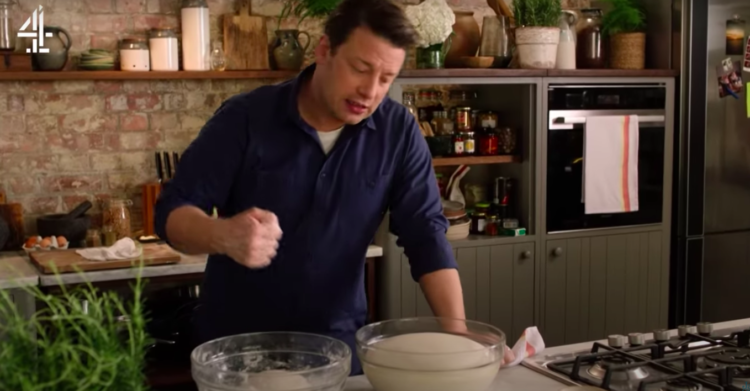 Making bread might seem intimidating at first, but trust us: It’s not as hard as it seems. His recipe involves just a handful of ingredients and doesn’t take a lot of time to come together—or at least, it takes much less time than a standard bread recipe would take.

The recipe is also super versatile—you can add different flavors or toppings and form it into shape or size you want. Make mini loaves in a tin or a couple of large loaves to use for sandwiches (note that the recipe makes about two normal-sized loaves).

“There’s so many different things you can do, and I think now more than ever, it’s quite nice to do this,” Oliver says.

Are you ready to tackle this delicious bread? All you need to get started is yeast, flour, water and salt. We’ll let Oliver take it from here! Check out his easy-to-follow recipe in the video below for the most simple bread recipe you’ll ever make.

Have you ever made bread before? Do you think now is a good time to try? What types of hobbies have you picked up during this time?