How To Make the Most Deliciously Comforting Bolognese Sauce

Tell us: Are you currently stuck at home during a pandemic with a load of new free time you’ve never had before? Same!

One of the most common ways people are passing the time as the COVID-19 outbreak continues to unfold is trying out new recipes at home. Whether it’s peanut butter bread or even Queen’s Elizabeth’s favorite chocolate cake, there are so many ways to get creative in the kitchen during your quarantine.

A meat-based sauce of Italian heritage, Bolognese originated in Bologna and is most commonly served on tagliatelle al ragù and to prepare lasagne alla Bolognese—well, at least in Italy. In America, we can top it over boxed spaghetti or fettuccine and it will still taste as good as ever.

The key is really in the sauce itself, not the pasta you put it over. And we have the perfect recipe, thanks to The Domestic Geek, a YouTube cooking star specializing in easy and delicious recipes.

She describes her recipe as “rich, hearty, and simmered to perfection.” Are you drooling yet?

“It’s full of simple but incredibly flavorful ingredients that come together to create something really special,” she says. 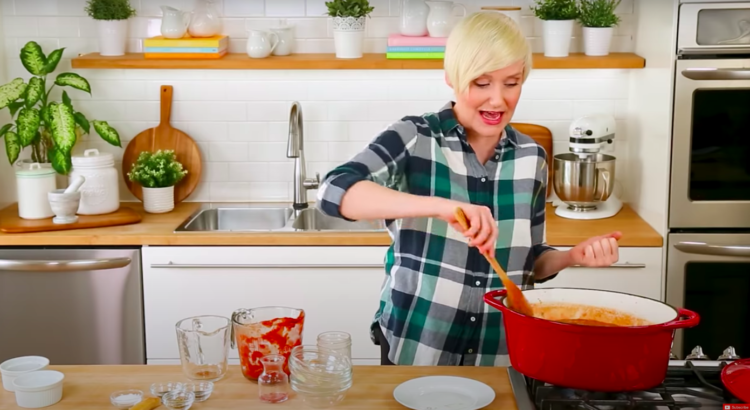 Before you get started, know that her recipe makes several servings, so unless you plan to cut the recipe in half, you’ll want a big pot or Dutch oven to simmer the goodness in. Plus, the recipe freezes well and for up to three months, so you can easily pull it out when you don’t feel like cooking.

While your typical Bolognese calls for ground pork, the Domestic Geek likes to keep things a bit on the lighter side and recommends using ground chicken. You’ll also need ground beef—but again, the recipe is super versatile.

Other ingredients you’ll need are some veggies such as onions, celery, and carrots; garlic; red wine; crushed tomatoes; beef broth; and milk, which she says is key to a creamy, delicious texture in your sauce (even though some people think it’s a controversial ingredient—just don’t listen to them!).

You’ll also need a variety of dried herbs such as oregano, basil and thyme. Dried herbs are actually more flavorful in a recipe like this than fresh, the Domestic Geek explains.

Lastly, there are two secret ingredients in this recipe. The first is sugar. Just a little of the sweet stuff—it helps offset the intensity of the acidity in the tomatoes.

For the second, you’re going to have to watch the video below! Check it out.

Happy Bolognese making! Will you be making this recipe while you quarantine? What kinds of new recipes have you made so far in your free time?