Keanu Reeves is one of those celebrities that just about everyone likes. Not only is he an amazing actor in movies like the Matrix series, and he’s also awesome as a real life human too. In fact, a simple Google search will tell you about all the countless Keanu Reeves act of kindness stories there are (read: there’s a lot of them).

For example, there was the time Keanu bought a fan ice cream just so he could have a piece of paper to sign an autograph,. And then there was the time he gave up his seat on the subway for a total stranger to sit in, just because he’s a nice guy.

Keanu, we love you. And we know someone who loves him back. Okay, so it’s just a crush, but on the Ellen Show in 2018, actress Sandra Bullock was the guest star and she revealed a little secret.

Back in 1994 when she and Keanu Reeves were filming the movie Speed, she admitted that she developed a little tiny crush on Keanu. I mean, how could she not? “I think about how sweet Keanu Reeves was and how handsome he was,” Sandra said of her co-star. “It was hard for me to really be serious [on set.]”

How adorable! Though to our dismay, the two never dated. “There was something about me that I guess he didn’t like,” Sandra joked.

However, she couldn’t have been more wrong. On a recent segment of the Ellen Show, Ellen had Keanu come and and she showed him the clip of Sandra talking about him like she was a school girl in puppy love. And his reaction to her feelings was completely unexpected and adorable to say the least. 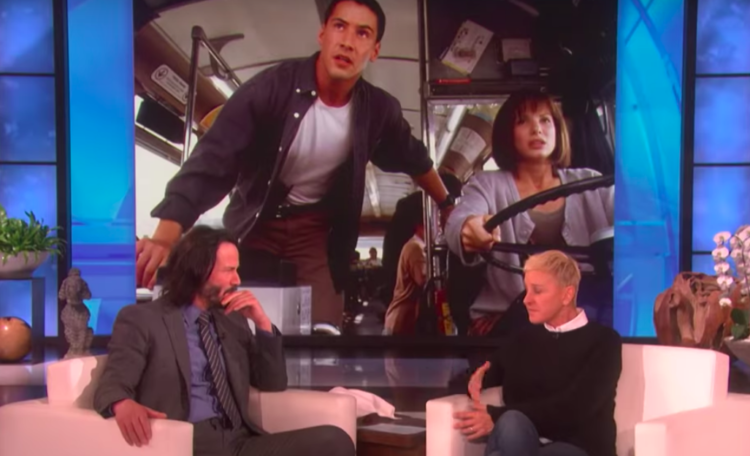 When Ellen asked him if he knew she had a crush on him back then, he replied, “She obviously didn’t know I had a crush on HER either,” he said. Cue the awwws!

The only reason he never brought it up to her (and likely why she didn’t bring it up to him either) was because they were working, and that wouldn’t have been professional. Though Keanu sort of implied he’s had relationships with people he’d worked with before, so…

“That chemistry was real because you both really did have feelings like that,” Ellen said. “That’s sweet.”

“It was nice to go to work,” Keanu said. “She’s such a wonderful person, a wonderful actress.”

As far as we know, Keanu isn’t seeing anyone right now, and Sandra got divorced from her then husband Jesse James in 2010. While she’s been in a relationship with Bryan Randall since 2015, we think he’d better watch out now that the crush is out!

To see the adorable clip of Keanu telling Ellen that he had a crush on Sandra when filming Speed, check out the video below.

How sweet is Keanu Reeves in this clip (and how funny is Ellen, as usual)? Could you ever see these two Hollywood celebs dating each other in the future?