There’s something about watching a perfectly choreographed dance routine that’s just so mesmerizing. It’s truly encapsulating to see all the dancers involved in the exact same beat, moving their bodies so flawlessly at the same exact time.

If you feel the same way, then your jaw is going to drop at one astonishing performance by a high kick troupe called Emerald Belles.

High kicking is just what it sounds like: Kicking your legs high in the air, but in a graceful, synchronized manner. And trust us: Just because it looks graceful doesn’t mean it’s as easy as it as looks. After all, this is the signature move of the Radio City Music Hall Rockettes, and they are not exactly amateurs!

The Emerald Belles is made up of around 70-100 girl students at Carroll Senior High School in Texas. The troupe went viral after an enthralling routine that they performed for the Showmakers of America Dance Competition.

From the moment the music began to the very last second, this dance team keeps their eyes on the prize—and if you’re a viewer, you can’t stop staring. It doesn’t look as if a single foot or arm movement from any of these dancers was out of place. It’s obvious that a ton of practice really paid off for these ladies! 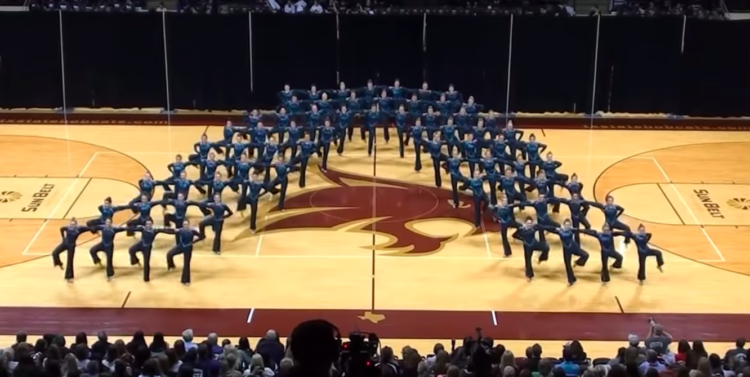 Honestly, it’s no surprise that the Emerald Belles performed so perfectly. If you’re wondering why this group looks so familiar, there’s a legitimate reason.

The Emerald Belles have gained much popularity over the years, not only from their amazing routines like these, but also because they appeared as competitors on Season 14 of American’s Got Talent. They made it through three rounds on the show, even getting to be featured live on NBC in the quarterfinals from the Dolby Theatre in Hollywood before they were eliminated.

In addition, the Emerald Belles also made appearances on several other popular shows including The Kelly Clarkson Show, Good Morning Texas and the Kidd Kraddick Morning Show.

Want to see how they got started? Check out the whole original routine in the video below, and try not to let your jaw drop!

What do you think of this dance routine? Have you ever seen anything like it before? Did you see the Emerald Belles on American’s Got Talent? What did you think of them?