Dance teams are a big deal at many schools, wowing audiences with their carefully choreographed moves, dazzling uniforms, and impressive talent. Dance team competitions can be as fiercely competitive as any sport’s!

If you think you’ve seen all there is to a dance team routine, then please check out the totally unexpected work of the Bobcat Belles from Hallsville High School, Texas! These awesome ladies performed a four-minute routine to a medley of songs….all while dressed as the famous Chick-fil-A cows. Talk about talent!

The ladies entered the gymnasium dressed head to foot in matching black-and-white cow costumes. At the sound of a cow mooing, they got to work. Their music choices played off of the cow theme, as they danced their hooves off to bits of songs like “Milkshake” by Kellis and “Proud to be a Cow” from Sesame Street. 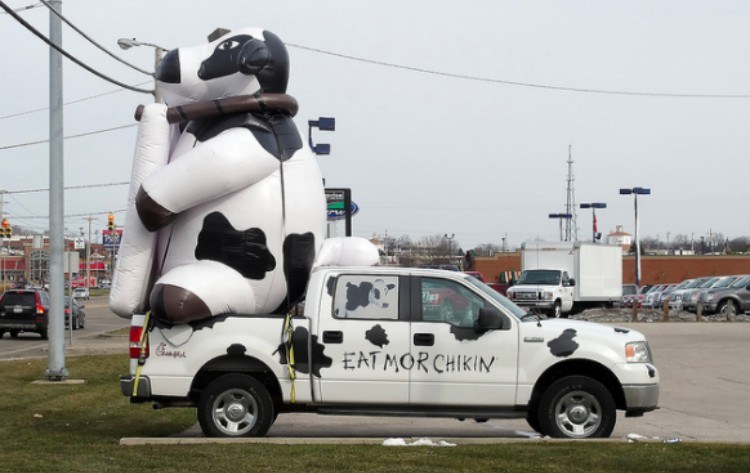 My personal favorite moment comes right at the beginning of the routine, when the Belles danced to a parody of the Beatles’ song “Yesterday,” with the words changed to “Chick-fil-A….I could eat that seven times a day…..oh I belong to Chick-fil-A.”

Why did the Belles decide on such an unusual routine? The cow dance was supposed to be the group’s “novelty” dance–a moment when a team gets to break away from the standard competition moves and do something a little more fun. The Belles just decided to kick it up a notch!

The mooooves (see what I did there?) were also meant to be part of a fundraising drive in preparation for an upcoming national competition the Bobcat Belles are taking part in at the end of March. They hoped the attention-grabbing cow routine would help the group raise money they need for costumes and travel expenses.

It looks like their plan got the crowd fired up, according to a Facebook video of the dance. “The whole gymnasium was in tears laughing so hard,” said the original post. Once it made its way online, the video of the Belles’ routine became a viral hit. It’s been viewed over 13 million times on Facebook alone, and shared by over 200,000 users! 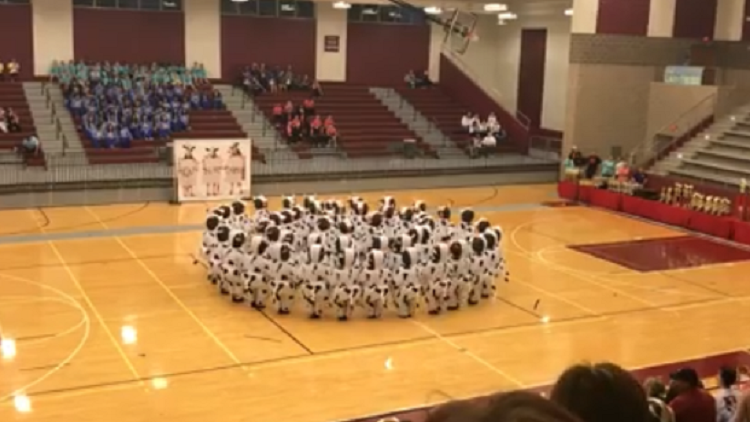 Viewers are praising the talent and creativity of the Bobcat Belles. I’ll second that! How hard must it be to move that good in those costumes? People aren’t passing up the chance for a good pun, either. On the team’s GoFundMe page, one user wrote:

Man-ure great hoofers! Udder-ly great entertainers. Are any of you named Patty? NVM, I shouldn’t step there. Cud you answer one question though? Does my donating to you make me a Cow Tipper? I wouldn’t want anyone having a beef with me. Enjoy your fame ladies! It’s not cheesy. Grab the bull by the horns and milk it for all it’s worth. Moo-ve up the ladder of success! I dairy you. ;) You’re not even close to being past-ure prime. Go Cow Belles!

It’s great to see these young ladies bringing smiles to our faces all while practicing their talents and building team spirit!

Check out the link below to watch the full video of this amazing routine. And if you want to support the talented Bobcat Belles, you can check out that GoFundMe page. One of the Belles’ mothers said “I think they should be sponsored by Chick-fil-A for life.” Do you think Chick-fil-A should step in and support the team?