There are so many benefits to breastfeeding. On top of incredible health benefits your baby gets from it, it’s super convenient considering you can do it any time, anywhere. Right?

Well, with some exceptions.

One mom recently sparked a huge debate after she literally tried to breastfeed her daughter anywhere—as in, while she was driving in the middle of traffic. Raquel Reynolds, an Australian mom of four, posted a video of herself on her Instagram page breastfeeding her 4-month old baby while she was behind the driver’s wheel.

With an accident up a few miles ahead that was causing traffic and no place to pull over, Reynolds felt like she had no choice but to do it right then and there since her child was obviously hungry. And while that may be true, it doesn’t mean what she did was safe.

While the video has since been deleted from her feed, it has caused quite the ruckus while it was still around. In it, Reynolds is seen driving along slowly with her little one attached to her chest.

“We’re sitting in traffic and baby’s hungry…it’s so dangerous [and] it’s a bit crazy,” Reynolds admitted in the video. “But what am I supposed to do?”

While some people emphasized with Reynolds, commenting that they would’ve done the exact same thing in her situation, the majority of the posts were appalled at how much she was putting her baby in harm’s way. 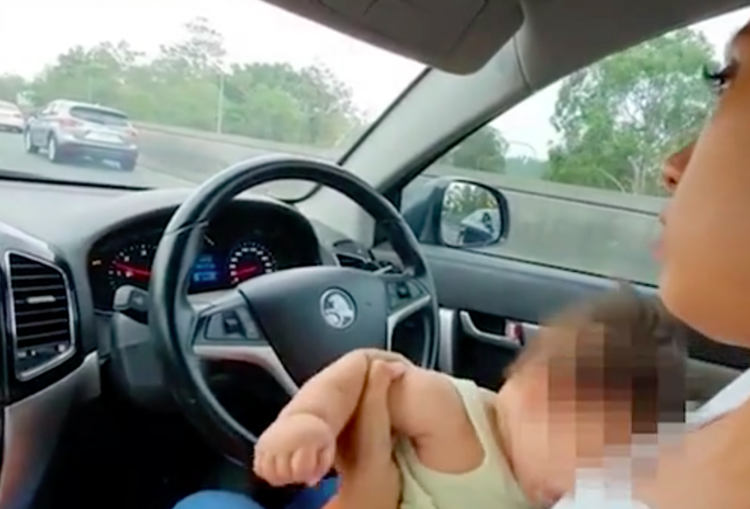 As far as solutions, a general consensus advised that Reynolds should have prepared a bottle before getting in the car, or feeding the baby once she was able to come to a complete stop.

Additionally, experts also got hold of the video and had a lot to say regarding safety.

“To not have a child properly restrained is risking their lives,” said Lauren Ritchie from the Royal Automobile Club of Queensland was strongly against the decision. “That’s how serious an outcome it is. Even a small crash can injure a child.”

“I’m very pro breastfeeding, but nursing has a time and a place,” said Debbi Baer, a NICU pediatrician who runs the website The Car Seat Lady. “A moving vehicle is not the time or the place. Nursing your child while the car is moving puts both you and your baby at significant risk of unnecessary injury.”

To give you a visual, Baer explained exactly what would happen in the unfortunate event Reynolds would’ve crashed the car. Warning: It’ll make you cringe.

“If [Mom] is leaning over the baby to nurse, her chest will slam down on the baby’s body in a sudden stop of crash,” she explained. “You wouldn’t drop a 1,000-pound cinder block on a baby—so too you shouldn’t lean over the child to nurse them—as your body can crush the child.”

To view the moment for yourself, check out the video below.

What do you think about Reynold’s video of her breastfeeding in a moving vehicle? What would you have done in her situation?