Mom Ticketed While Breastfeeding In The Backseat Of Her Parked Car, Doesn’t Think She Deserves It Even Though She Pulled Into A Commercial Zone

New moms (and veteran moms) know that breastfeeding doesn’t always come easy. Not only can it be physically demanding on your body, but it can have just as much of an effect your mental capacity as well. Plus, the hours a day you spend feeding your child can truly be daunting.

Of course, many mothers still opt to breastfeed their child due to the nutritional benefits, but that doesn’t mean it’s easy or fun. And it certainly doesn’t help if you live in bustling New York City and are maneuvering through traffic at a time when your 3-week-old baby needs to nurse.ba

That’s just what happened to Manhattan resident and new mom Guillermina Rodriguez. She was driving around in her car when her newborn started to cry in the backseat. She knew that she was hungry and needed to nurse, but was having a hard time finding a place to pull over.

Rodriguez wound up driving around for nearly 45 minutes looking for a place to feed her baby, but eventually couldn’t take it anymore. When a baby’s gotta eat, she’s gotta eat! Even though she knew the parking may be an issue, she did was she had to do and pulled over in a commercial zone. 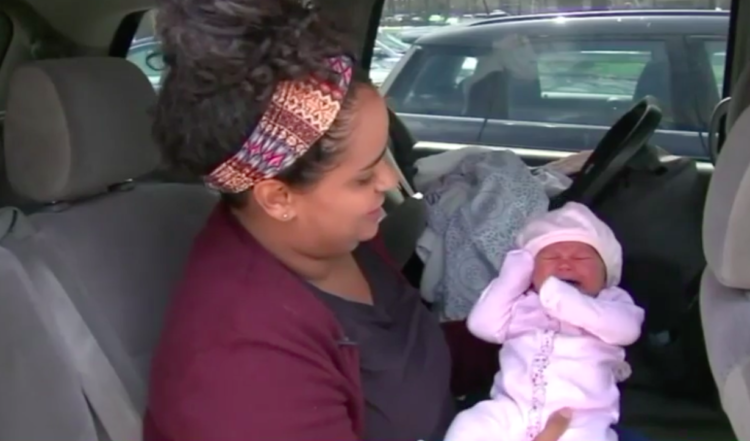 With no other choice, Rodriguez climbed into the backseat with her baby and began to breastfeed her. However, not too long after she began, a New York Police Department tow truck pulled up next to her.

The police officer knocked on the window of the car to see what was going on, and Rodriguez gestured to him that she was breastfeeding her child. According to Rodriguez, the officer waved her away in disgust before putting a $115 ticket on her windshield for standing in a commercial zone. Then he walked away without letting her give an explanation.

“He’s backing up to tow my truck, so as I am in this position breastfeeding now I jump over to the front seat to honk so he can see you know, like, ‘Don’t tow my truck, I’m in here,'” Rodriguez explained to CBS New York.” I’m actually breastfeeding on one side and pumping on the other so both my breasts are out, and I turn and I’m like, ‘I’m breastfeeding the baby!'”

She couldn’t believe what had just happened. “I think they should’ve been a little bit more sensitive,” Rodriguez said, adding that she plans to appeal the ticket.

So do breastfeeding advocated everywhere. Should Rodriguez really have received such a hefty ticket for just doing what was best for her child at the moment?

To hear from Rodriguez herself, as well as find out whether the ticket will be dismissed or not, check out the video below.

What are your thoughts on Rodriguez getting a ticket? Do you think she deserves to be fined for what she did, or do you think the officer should’ve given her a warning instead?

Have you ever found yourself in a position where you had to breastfeed in a not-so-ideal place? What did you do?