Ah, pool parties—one of the best times for people in elementary school, right? You get to swim and laugh and play with all your friends in the sunshine. What could be better?

Well, one mom named Jennifer Smith was happy to let her child attend a 6th-grade pool party they were invited to. However, once she saw the slip that shared the dress code for the party, she quickly felt like she had to fight back.

The slip specifically states that all girls must wear a t-shirt over their swimsuits. What’s more, is that they specified that the t-shirt can NOT be white. 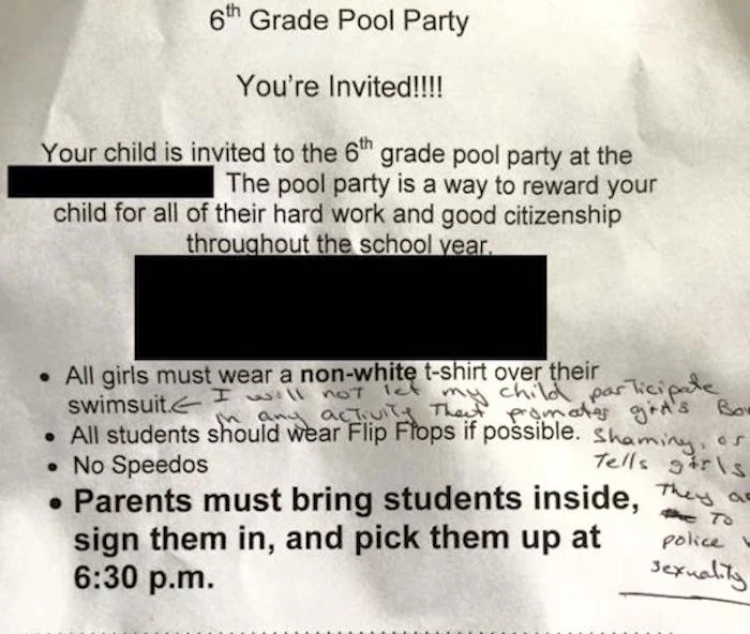 Jennifer was pretty pissed. Really—they were going to make girls cover themselves up at a pool? A pool, where bathing suits are the preferred and most appropriate form of attire?

She decided to bring her concerns to the administration at the school—and was met with some disappointing information that only spewed her anger more.

“Due to the varying sizes of students at this age, [making T-shirts mandatory] takes away the ability of kiddos making fun of others for wearing a shirt [since] everyone is required to wear one,” the principal told her.

Additionally, a district spokesperson told the Huffington Post that the reason they asked for it to be a T-shirt was that they didn’t want to limit themselves to one-piece bathing suits, which some people may not own.

“We know that for many of our families, buying an extra [one-piece] swimsuit for their children would be a luxury they cannot afford,” they stated. “To address the issue of appropriate dress for the swim party, we believed asking the girls to wear T-shirts over their swimsuits was the solution that addressed the issue most sensitively.”

Jennifer still wasn’t taking this well. Why should girls have to cover up, but boys didn’t have to? Sure, the slip specified “no Speedos”—but why do boys not have to wear a T-shirt as well?

“I am not sure if you are aware of the emotional hardship that is caused by [telling] young girls their bodies are inappropriate and must be covered…Setting one standard for half of the student body only promotes the idea that girls’ bodies are naturally shameful, and helps to send a very damaging message,” she wrote to the school.

Good news: After that, the school actually decided to change its policy! They changed the policy to say that T-shirts were optional for everyone. The funniest thing was that no one wound up wearing them and everyone had a grand old time. What do you make of that?

What are your thoughts on requiring female students o wear T-shirts at the pool?