I think we can all agree that spiders are the absolute worst. Every time you go to kill one on your bathroom ceiling or kitchen floor, they do 800 backflips and scamper away, never to be seen again.

One time I was innocently brushing my teeth and a huge tarantula of sorts all of a sudden appeared before my eyes. It was right then and there he decided to start building a web—as I was two seconds from spitting my toothpaste into my sink.

Well lo and behold I spit the toothpaste all over the mirror instead, and then did some weird inadvertent karate move to try to kill the spider. I ended up hitting the wall with the back of my hand, hurting myself, and what do you know? The spider got away scot free.

I always swore that if I saw a spider in my car while driving it would be hazardous for me to be driving as I’d probably swerve all over the road trying to kill it only to end up in an accident while the spider survived.

Well, sadly, one woman just lived my nightmare. She was just driving along a road in Cairo, New York, when she noticed a spider in the front seat. “The operator panicked and crashed,” the Town of Cairo New York Police Department posted to their Facebook page. 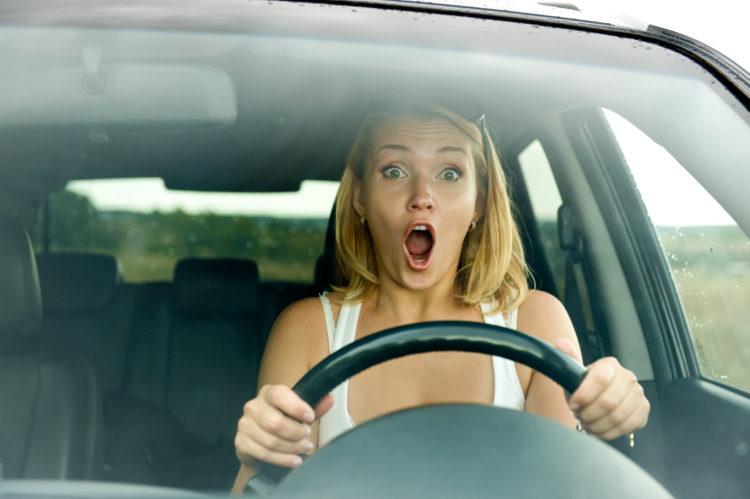 The woman suffered a leg injury but otherwise, thankfully she’s okay. However, the spider? We have no idea where he went. “For safety measures should probably burn the car too. Just to make sure it’s really dead,” someone commented on the Facebook post. Accurate.

In all seriousness, this isn’t the first time someone has crashed a car because of a spider. One of the most common phobias in the world is arachnophobia, which is the fear of spiders, affecting 3.5 to 6.1 percent of the global population.

People felt compelled to tell their own stories about seeing spiders while driving—or what they would’ve done if they had. Needless to say, this woman is not alone.

“I rear ended someone when I realized there was a bee in my car!! I wish I was kidding! Luckily I was already stopping so I hit him at a very slow speed! Lol I don’t know what I would’ve done if it was a spider! It might have been much, much worse!” someone shared.

“OMG, this could totally happen to me! I usually spray them to death with whatever air freshener I have handy! But then I have to air out the car which is only an invitation for more of those little freaks. #ArachnophobicConundrum” someone else wrote.

“We know that it is easier for some drivers than others,” the police said. “But PLEASE, try to teach new drivers and yourselves to overcome the fear and pull over to a safe place. Lives depend on it.”

To hear more about what happened when this woman crashed, check out the video below.


Do you have a fear of spiders? Have you ever crashed a car because of a spider or other insect? Do you have any advice for people who might worry about this?