While there are many things involved in planning a wedding (the venue, the cake, the dress, where to seat your relatives who don’t get along), without an engagement there is no wedding. And before there can be an engagement, there’s often a nervous guy walking into a jewelry store not sure which engagement ring to buy his girlfriend.

Guys out there better be careful because there’s a new trend called “ring shaming” and it’s pretty much exactly what it sounds like. There are groups on Facebook that completely revolve around members posting pictures of wedding and engagement rings (including their own) and criticizing them.

Nope. Instead, she was so unhappy with the ring that she posted a picture of it in the ring shaming group asking for advice about how to ask her boyfriend to get her a different ring. 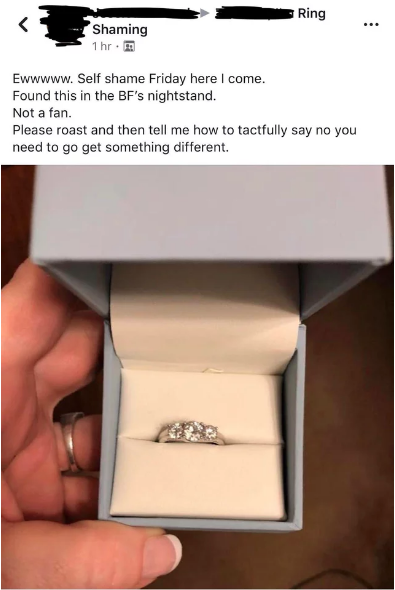 One person said, “I still am amazed by how ungrateful someone can be when someones willing to spend that much money on them.”

Another lady shared, “My man could propose to me with a Walmart ring and I’d be happy. How can you be so spoiled and ask people to roast it :(.”

One brave soul actually admitted to being in the same ring shaming group. “This is just an all-around ‘yikes’. I’m a part of this ring shaming group, and for the most part it’s people willingly posting their own rings with some hilarious self-depricating humor or absurd rings found on Wish, Facebook ads, etc. But I agree- this post comes off as ungrateful and childish. I’m a major advocate for discussing likes, dislikes, plans, etc with your future partner, and that comes down to even the engagement ring (if y’all choose to have one). At the end of the day, the best part is that someone you love has decided they would love nothing more than to spend their life with you. This post is shallow, and I can attest it doesn’t represent the majority of people in this FB group/community.”

While we’re not sure if this lady got any advice about how to tell her boyfriend she wants a different ring, we hope she didn’t break his heart. Poor guy was probably nervous about the proposal.

What do you think about the concept of “ring shaming”? If you’re married, do you wish you had a different engagement ring?