Couples getting divorced isn’t (sadly) really a shocker these days—after all, 40-50 percent of married couples in the United States divorce, according to the American Psychological Association.

But what is a little confusing is why a happily married couple would consider divorce.

Meet Jake and Maria Grey, a very happy husband and wife who have been married for nine years. They live in Texas with their two daughters, 2-year-old Fairen and 6-year-old Brighton. Brighton was born with a rare genetic disorder that affects different parts of the body called Wolf-Hirschhorn syndrome.

Some of the hallmark symptoms of Wolf-Hirschhorn syndrome include a distinctive facial appearance, delayed growth and development, intellectual disability, low muscle tone, and seizures.

The parents say that though she’s two, she’s developmentally still a newborn and needs 24/7 care probably for the rest of her life. You can imagine how much Jake and Maria’s medical costs have added up to over the last two years due to the care Brighton requires.

They’ve tried to get Medicaid to help supplement some of the costs, but unfortunately, Jake’s salary (which is $40,000) is too high for the family to qualify for it. They’ve applied for the state to help them, but being number 60,000 on the list—yes, you read that right, 60,000—the couple is starting to lose hope. 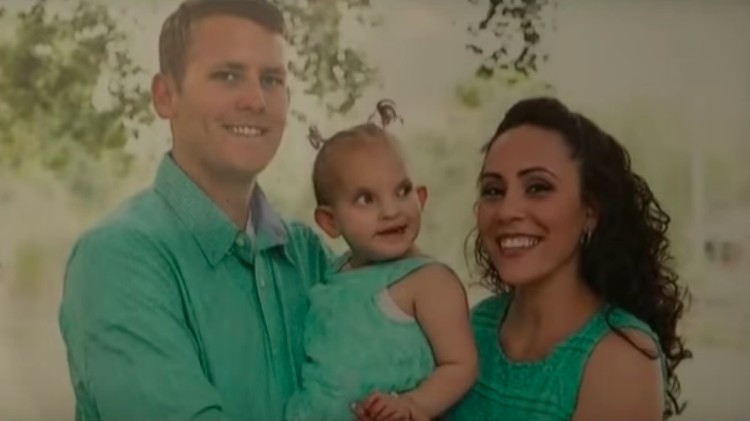 While it might initially sound like a bizarre idea, if the couple got legally divorced, Maria would then be defined as a single, unemployed mother, which qualifies her for Medicaid.

At their last straw, the two determined that getting a divorce might actually be the one and only way they could get the financial assistance they need to offset the cost of Brighton’s medical bills. “You’d try anything when it comes to your child,” Maria says. Ain’t that the truth?

The two do have private health insurance, but that still runs them about $15,000 of their own money every year.

“It’s drowning us to try to keep up with her medical expenses,” said Jake, an Army veteran. “We’ve done everything we can do to try to keep her afloat, and we’re going to reach a point where we can’t do it and we won’t have another option. We don’t know what to do.”

Of course, the natural thing to do when you hear a heartbreaking story like this is to offer your own help, but, while grateful for others wanting to step in, Maria says she doesn’t want to accept any charitable donations or even to set up a fundraising page. She just wants the state to “step up and give us the benefits that we need,” she said.

To hear Jake and Maria’s side of the story in an interview with KCENTV, check out the video below.

What do you think of this story? Would you go through a divorce just to help your child?