Mom Thinks Baby’s Gender Is The Secret, Then Sees Unexpected Message On Baby Bump And Loses It

Most women grow up dreaming about the big day when they’ll get married, have babies, and live happily ever after. So when this woman got everything all in one day, it was pretty much a dream come true.

The mom-to-be started her day with a scavenger hunt along with her son and the man she was expecting a child with. Their first clue was to head to a furniture store, so off they went. There, they found their second clue, which was that the gender reveal was going to be held at Grandma’s.

When they got there, they were greeted with all of their friends and family already there, decorations all around. Everyone was dressed in either blue or pink, so eager to find out whether the baby is a boy or girl.

Every gender reveal has got to have a fun way to present the sex of the baby—so mom was taken off to have her bump painted with either “boy” or “girl.” The plan was that she’d come out in front of everyone and lift up her shirt so that everyone can find out together.

But everyone—especially dad-to-be—had a huge surprise in store for her. One that didn’t have anything to do with the baby.

The woman doing the painting made small talk with mom-to-be as she painting a huge engagement ring around her belly—while she was wearing a blindfold, without her having any idea. She also wrote the gender of the baby.

Still blindfolded, several friends helped her outside so that the big reveal could happen. Everyone waited patiently surrounding her as she came down the stairs—especially dad-to-be. In fact, he was front and center when this was all going down. 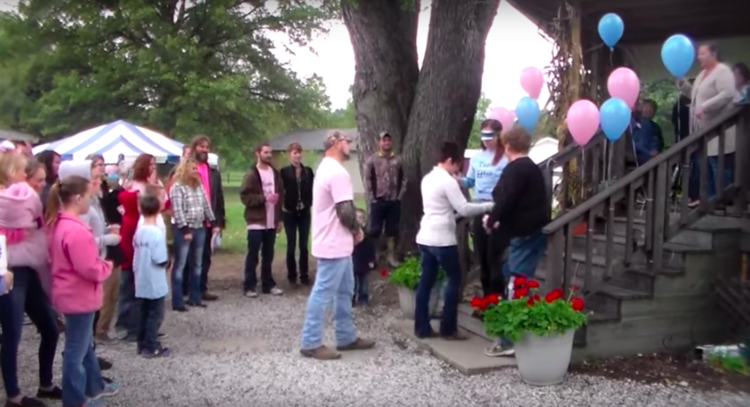 Suddenly, things get real. Like really real. He drops to one knee.

When the woman took her blindfold off and saw her baby daddy on the ground with a ring, asking her to spend the rest of his life with her, she was beside herself. Somehow, she still remembers to lift up her shirt and sees that she’s having a boy—and the huge ring painted around it—and loses it even more.

It would be beautiful if the story ended there—but it gets even better. After more tears and an acceptance to the proposal happens, dad-to-be has one more question for his bride: “Will you marry me—today?” he asks.

That’s right. This man had planned to have a proposal and a wedding (and a gender reveal!) all in one day. After all, all their friends and family were already there. He had planned ahead, getting her a dress, a pastor, a cake—it made perfect sense.

Overcome with emotion, the new bride dropped to her knees alongside her husband-to-be and said that she’d marry him that day.

There wasn’t a moment to lose! Everyone hopped into action to make sure that there was a wedding to be had before dark.

To see the whole thing go down—including the wedding—check out this tear-jerking video below.

We think it’s safe to say this was a day this couple will never forget. What do you think of how Dad planned out a gender-reveal-gone-surprise-wedding? How would you have reacted if you were in this position?