Bang Media
Actors Tom Hanks and his wife Rita Wilson were among the first celebrities to be diagnosed with coronavirus about a month ago when the outbreak was just beginning. The two contracted the virus while they were in Australia and were instructed to remain in self-isolation there until they were better.

While the two have since recovered and have safely made it home, the journey for the married couple was no picnic. While they’ve shared a few details about what life was like with the disease, Hanks recently opened up more so about their symptoms and experience with COVID-19.

As most people who have coronavirus, one of the main symptoms both of them had was fatigue. It was so bad that just a few minutes of subtle moving winded Hanks. “I was wiped after 12 minutes [of exercising]. I laid down in my hospital bed and just slept,” Hanks stated on the National Defense Radio Show.

At the time, no one really knew a whole lot about the virus, so Hanks mentioned on the show that he told a healthcare worker that he was confused at how he could barely do even basic stretches without being winded—and the response he got was nothing short of comedic.

He told her, “‘I just had the weirdest thing. I just tried to do basic stretches and exercises on the floor and I couldn’t even get halfway through.’ And she looked at me through her glasses like she was talking to the dumbest human being. And she said, ‘You have Covid-19,’” Hanks said.

Rita, in particular, was hit a bit harder with her symptoms. “[She] went through a tougher time than I did,” Hanks said, adding that her fever was higher than his at around 102 degrees Fahrenheit, she had awful chills, she lost her sense of taste and smell, and that “she got absolutely no joy from food for a better part of three weeks.” 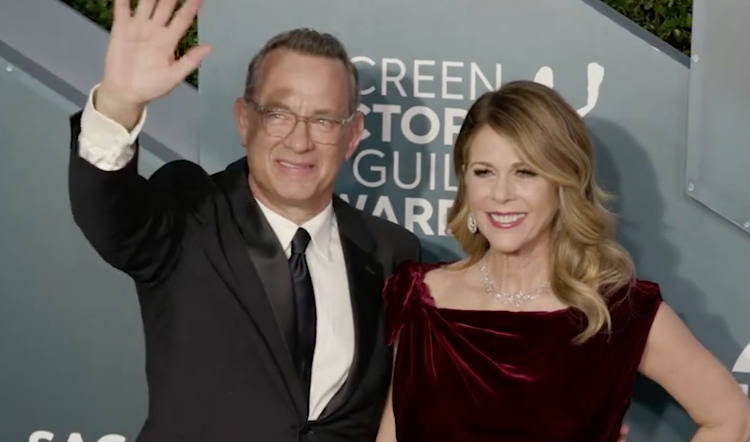 The latter probably had a lot to do with the awful nausea Rita was experiencing. “She was so nauseous she had to crawl on the floor from the bed to the facilities,” Hanks explained. Yikes.

“I felt extremely achy, uncomfortable, didn’t want to be touched, and then the fever started,” Wilson chimed in.

While the main symptoms of COVID-19 among many people seem to be fatigue, fever and cough, the virus seems to reveal itself in different ways for everyone who contracts it. Most importantly, people experience different levels of severity. Some are even asymptomatic, not displaying symptoms at all.

If you experience symptoms of coronavirus, stay at home and call your doctor right away to order to get tested.

Do you know anyone who has contracted COVID-19? What were their symptoms like?