When it comes to cute country music couples, we think it just doesn’t get any better than the dynamic duo that is Tim McGraw and Faith Hill. Believe it or not, these two have been married for over 21 years now, and we are happy to report that, despite being faced with the adversity that all famous couples experience, they are still going strong!

In fact, just this past week, the talented couple stopped by The Tonight Show for an interview with Jimmy Fallon. There, they discussed their new full-length album—a critically-acclaimed collaboration between the husband and wife—as well as the details surrounding the very beginnings of their relationship.

Now, it probably comes as no surprise to you that McGraw was the first one to fall head over heels for his now-wife. In the interview, the 50-year-olds — and “non-vampires” (we think) — describe what it was like meeting one another at an industry show all of those years ago.

McGraw says, “I looked at her, and I was smitten right away!”

Even though her future husband was sporting a long mullet and quite the jacket to go along with it during the first meeting, Hill luckily didn’t ice the dude out immediately—though it does sound like the initial courting process took longer than he would have liked.

“She didn’t fall in love with me right away,” McGraw asserts. “There was a LOT of time!”

We feel you, man. Only the luckiest of lucky couples fall for each other at the same exact time. So, even though these two are celebrities, they sure seem to have that average “boy meets girl” story in common with the rest of us.

Eventually, McGraw must have done something right along the way because the two are still very much in love, so much so that they have managed to raise three beautiful daughters and foster their successful careers all along the way. Good for them! 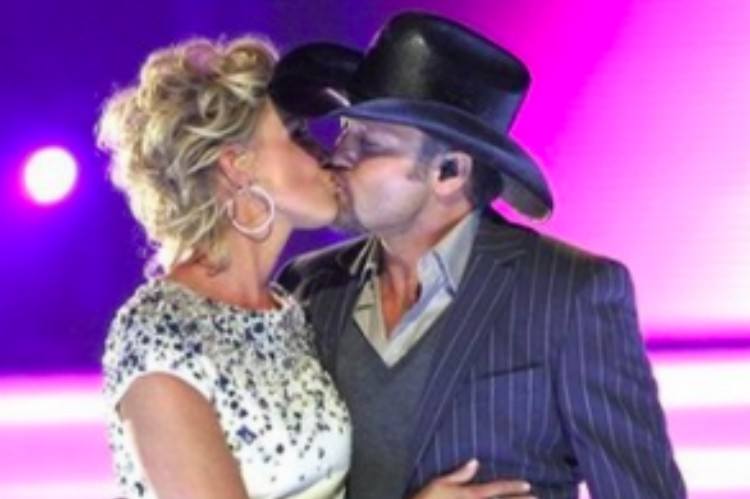 The couple that sings together stays together

Faith Hill and Tim McGraw are currently doing the talk show circuit in order to promote their new album The Rest of Our Life, as well as their new North American “Soul2Soul” tour.

The recently-released and much-anticipated album has been met with a bevy of favorable reviews, a fact that is not lost on the ever-grateful country singers.

You see, in the same Tonight Show interview, both Hill and McGraw said that their reason for recording this full-length album had everything to do with their new tour. It sounds like they wanted to have as much stage-time together as possible. Gotta love it!

To see this sweet—and oddly relatable—interview for yourself, be sure to watch The Tonight Show’s video below. When it comes to married country stars, we don’t think anyone comes close to dethroning this king and queen.

We’d love to hear your thoughts on Tim McGraw and Faith Hill’s long, happy marriage. Are you a fan of the pair? Have you listened to their new album? Who is your all-time favorite country music couple?