He Gets on Stage to Audition, Then Takes a Closer Look at Who’s Sitting Next to His Mom

When we’re looking for stories and videos to make us smile and warm our hearts, there are at least three types we can always count on: talented and precocious youngsters, successful and inspiring auditions, and surprises that bring people of all ages to tears. Today, we’ve struck gold, with a clip that involves all three!

The wonderful video comes to us from Britain’s Got Talent, and features sixteen-year-old Reuben Grey from Gilford, England. While Reuben is still pretty young to be trying his luck on such a large and prominent stage – he mentions in his introductory video that he’s also currently studying for his GCSE’s, important end-of-school British exams – he seems quietly confident as he walks out onto the stage in front of hundreds of people.

Even the ever-intimidating Simon doesn’t seem to rattle him. He responds to the infamously-dismissive judge with the same politeness he’d probably show to a friend of his parents’, simply stating that it’s “nice to meet him [Simon], too.” Simon, for his part, seems charmed by the teen’s impressive composure.

Perhaps even more impressively, Reuben doesn’t resort to stunts, bits or gimmicks to try to avoid the red-X buzzer and gain the elusive golden buzzer. Instead, he trusts in his talent and believes that less is more, and after a bit of chat, sits down at the piano to play and sing a song— one that he wrote himself. 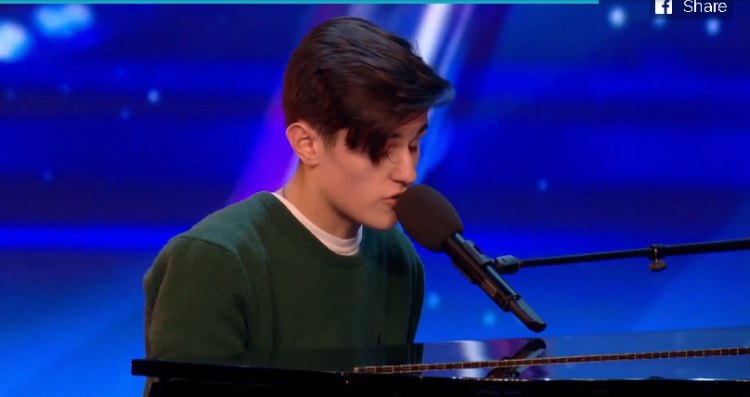 Yes, our young contestant is a bit of a songwriting prodigy! He’s been playing piano since he was seven years old, and writing songs since he was only ten. What’s more, the song in question, “Lifeline,” is one he says he wrote as an “apology” to his girlfriend. As he explains to the judges, he wrote it after she dumped him as an attempt to atone for, as he says, “not treating her right.”

Since he was about 15-year-old at the time he wrote it, we can forgive him and chalk up his behavior to a youthful learning experience. And since that same girlfriend is now back with him and sitting in the audience, it seems like his songwriting prowess works pretty well!

After watching his audition, we certainly agree with her— but that’s not the most heartwarming part of this audition video! Nope, that comes when Simon asks Reuben who’s there with him on audition day, and then asks him who his biggest fan is. While the aforementioned girlfriend and Reuben’s mom are there to cheer him on, it turns out his “biggest fan” is somebody else entirely— and they have a sweet surprise in store.

To see who’s unexpectedly sitting next to his mother, and to watch Reuben’s incredible audition for yourself, check out the video below!

Beautiful, right?! Reuben sure is talented, and we can only imagine how he’ll grow as an artist as he gets older. Plus, his dad’s surprise and enthusiastic support is so wonderful; we just love how he sings along to his son’s tune.

What do you think of Reuben’s original song? Were you surprised when his father stood up in the audience? What are some of your other favorite talent show auditions?