Think about a moment when you were feeling down in the dumps. Maybe it was that time you didn’t ace that work presentation quite as much as you thought you would or your little one is throwing a tantrum once again and you’re doubting your parenting skills.

Feeling blue is never a fun feeling. Most of the time when someone feels this way, they think they’ll feel better if they vent to a friend or family member. And most of the time, venting can help in these situations—but that all depends on how the person responds.

Toxic positivity vs. validation and hope

You know that feeling when you vent to someone hoping for some encouragement and they…kind of support you? You know those positive-but-not-positive phrases: “You’ll get over it” or “Just try to be happy.”

To put it frankly, these kinds of responses really don’t make anyone feel better. Perhaps the person who said them meant well, but riddle us this: When has someone ever felt better after someone else tells them to “shake it off,” or something of the equivalent?

While these types of phrases can be construed as somewhat positive, there are negative connotations surrounding it. This is what’s referred to as “toxic positivity.” These types of phrases make you feel like your negativity isn’t allowed—and that really doesn’t help when you really just need to feel supported.

To properly explain the difference between toxic positivity and getting validation and hope, Whitney Hawkins Goodman, LMFT, owner of The Collaborative Counseling Center, created her own graphic and posted it to her Instagram page @sitwithwhit.

The simple comparison photo does a great job of visually showing the differences between the two and it has since gone viral. Check it out below! 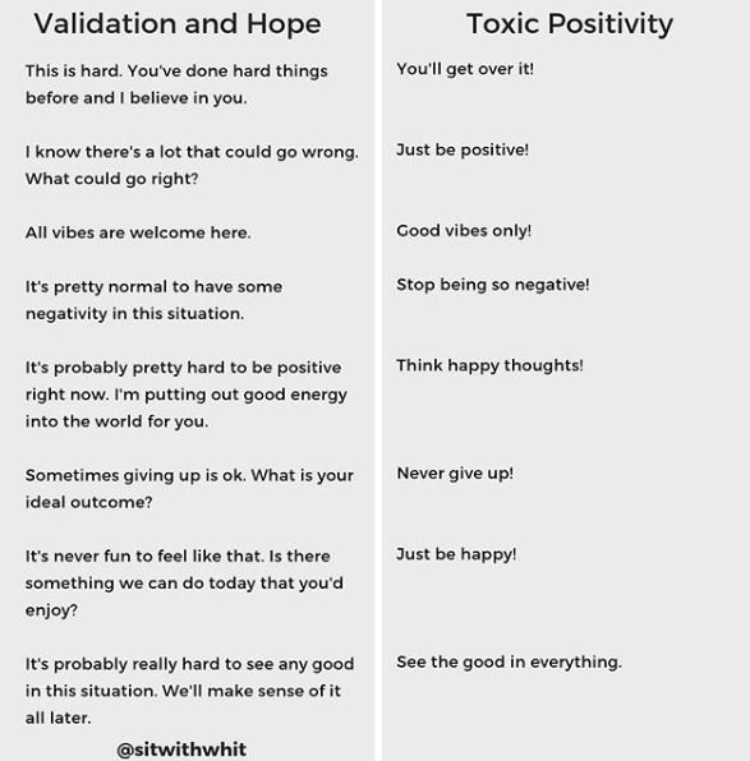 Some might wonder what’s wrong with the phrases on the right under “toxic positivity.” Many of them have the undertones of wanting the other person to be happy, and there’s nothing wrong with that, per se…

However, when a person is venting about their problems, they want to feel supported and hope for the future. By saying something like “Don’t be so negative”—sure, it’s telling the person to be happy, but maybe it isn’t that simple. And maybe that’s going to make them feel like they’re not allowed to feel the way they do—which can make them feel even worse!

Most of the time, the person venting needs to feel like their feelings are validated. And by saying any of the phrases in the “toxic positivity” box, they aren’t going to get that. However, by saying something in the “validation and hope” box, they’re much more likely to feel like the conversation they had was productive and feel better about the situation.

Think of it this way: “Toxic positivity” is basically telling someone to find the silver lining and be done with it—making them feel like it’s not okay to feel the way they do. Being truly positive is showing putting yourself in that person’s shoes to understand what they’re going through, and giving them a feeling of hope.

What kinds of helpful things do you say to people venting to you?