Scott Russo and his wife Erin live in a part of California where sheep are brought in by the local city government to help clear overgrowth in order to prevent future wildfires. So it’s not totally uncommon for them to pass a sheep on the way out or see one as as head home from work.

However, coming home to 200 sheep flocking their entire backyard? That was not something the two had in mind.

It turns out that Scott had opened his gate earlier in the day for his daughters to be able to look at the animals, but he completely forgot to shut it afterwards. Low and behold, the sheep thought that was an open invitation to invite themselves in!

“They quickly shuffled in and before we knew it, in the blink of an eye, there were hundreds in here and we just didn’t know what to do,” Erin said in an interview with local affiliate CBS13.

The first thing they did? Was grab the camera of course, so that they could get the whole chaotic moment on tape. Watching it as an outsider is hilarious—the sheep were in absolutely no hurry to leave, even after being continuously shouted at by Scott to get “outta the yard.”

But instead of leaving, more sheep kept piling in. They even decided to make themselves at home by moving towards the kids’ trampoline and see-saw as if to play with it. However, after a little bit, it wasn’t funny anymore (at least to the family). 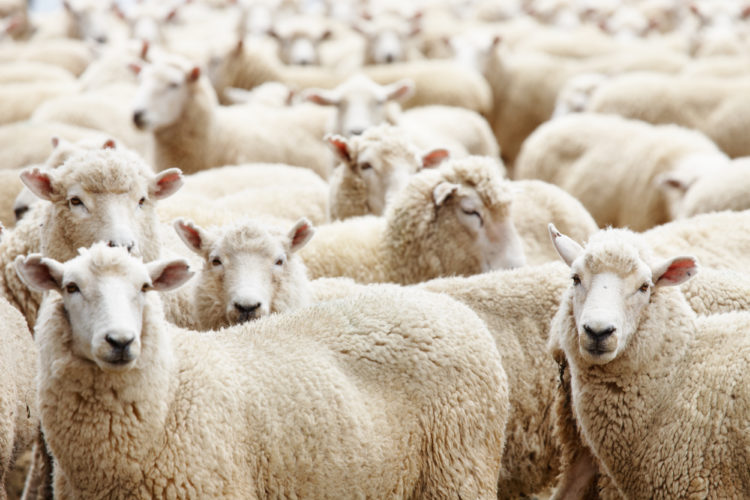 “I was horrified because my kids were outside so it turned serious,” Erin said.

So she did the only thing she could think of to do to really show the sheep that she meant business. Erin grabbed her girls’ tambourine and got on the trampoline to make a bunch of noise to scare them off.

That’s finally what did it (who would’ve thunk?). In just a few minutes, the sheep were scattering out of the yard and back to the land they worked for.

In hindsight, the Russos got lucky that only about 200 sheep entered their yard. There are eight herds made up of more than 5,200 sheep and 600 goats. “Sheep we use a lot on the grasslands. Goats are used for underbrush. They will eat poison oak, blackberries, anything,” said Ray Leftwich.Imagine the trespassing possibilities!

We’re pretty certain that the Russos won’t be leaving that gate open again any time soon. “I feel a little irresponsible for leaving the gate open knowing there was livestock out back. But they were so skittish- I didn’t even think it was possible that they would storm our yard like that,” said Erin.

If you’re looking for a laugh, the whole *sheepish* situation is sure to make your day. Just remember, someone’s day is always worse! Check it out in the video below.

What do you think of this family’s hilarious sheep invasion? Could you imagine if something like this happened in your backyard? How do you think you’d react?