How to Make a DIY Rainbow-Effect Countertop Using Upcycled Materials

People have the tendency to save strange things, but who are we to judge? As the old adage goes, “One man’s trash is another man’s treasure.” And if you’re a fan of working with upcycled materials, or just DIY in general, then you know this is sentiment is all too true.

Take this incredible countertop endeavor, for instance. One Imgur user was able to make use of a massive collection of colorful bottle caps. The handy guy found an innovative way to breathe new life into both the metal toppers and his kitchen.

He was ultimately left with a one-of-a-kind countertop that brings a ton of color into a relatively dark space. Talk about creating a serious conversation piece! Here’s how he did it:

The Imgur user, thepassionofthechirs, had asked his friends and family to save their bottle caps for the span of 5 years, solely with this project in mind. Talk about commitment, huh?

So, once all of the caps were collected, the DIYer enlisted the help of his little ones, and had them sort the caps out into rainbow-colored order: red, orange, yellow, green, blue, indigo, and violet.

He then sculpted the custom bar top of his dreams, painted, epoxied, and readied it for its colorful topping display.

Next came what seemed to be the toughest part of his journey. He was originally hoping for a pure rainbow effect, but quickly realized that he had far more black caps available to him than any other color.

So, thepassionofthechris decided to go with a “gradient” scheme for the countertop. All in all, he says that it took him a whopping 4 HOURS to settle on the right color pattern. 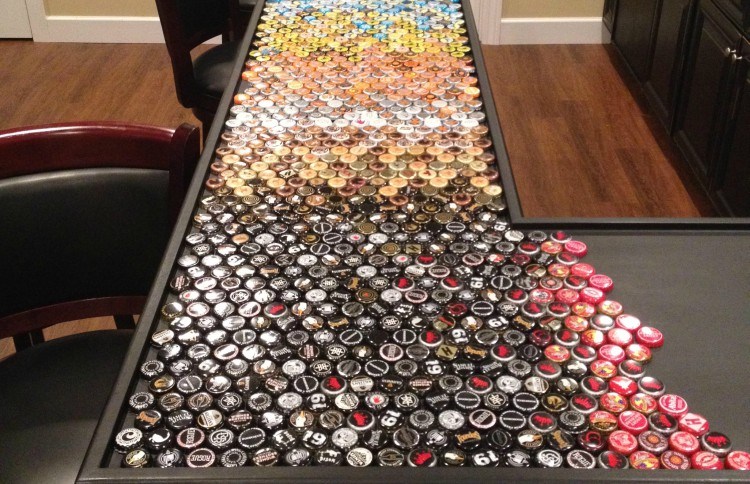 Imgur | thepassionofthechris
To keep the tops in place, he poured five layers of a special resin-epoxy mixture. Here, he notes that it’s important to do this as slowly as possible, as the bottle caps will actually start floating if too much of the mixture is dropped in at a time.

If you’ve ever worked with resin, then you know that you will most often be met with dozens of annoying little air bubbles in the middle of your masterpiece. To combat this common problem, the DIYer opted on using a heat gun to pull the bubbles out.

We absolutely love this creative project! Luckily, in thepassionofthechris’ case, he had a whole army of friends and family to help him achieve his dream quickly, but we think that anyone can take a stab at this challenging DIY on their own.

To see the dreamy, rainbow-inspired countertop for yourself, and to get a clearer view on the step-by-step process, be sure to read LittleThings’ article here. This may just inspire you to do something creative with whatever you have collected over the years!

What do you think of this bottle cap countertop? Have you ever created one of these on your own? If so, what was your biggest challenge that you faced in the execution? Tell us all about your thoughts and experiences in the comments section below!