stefherder via TikTok
Nachos: It’s arguably one of the greatest foods known to mankind.

Whether you eat them as a movie-night snack or shovel them into your mouth when you get back bar at 2 a.m., nachos—covered in cheese, beef, and all toppings—make our mouths water every time. It’s one of those snacks that just never gets old, especially since it’s so versatile and can be made differently every time.

In fact, we have to say that the only thing better than a little plate of nachos is an entire table of nachos.

Or is it? You can decide. People are up in arms after one woman shared a tradition she and her family do on vacations that involves something called a “nacho table.” This is pretty much what you’d imagine it is: Creating an entire table (instead of just a plate) filled with nacho-y goodness. 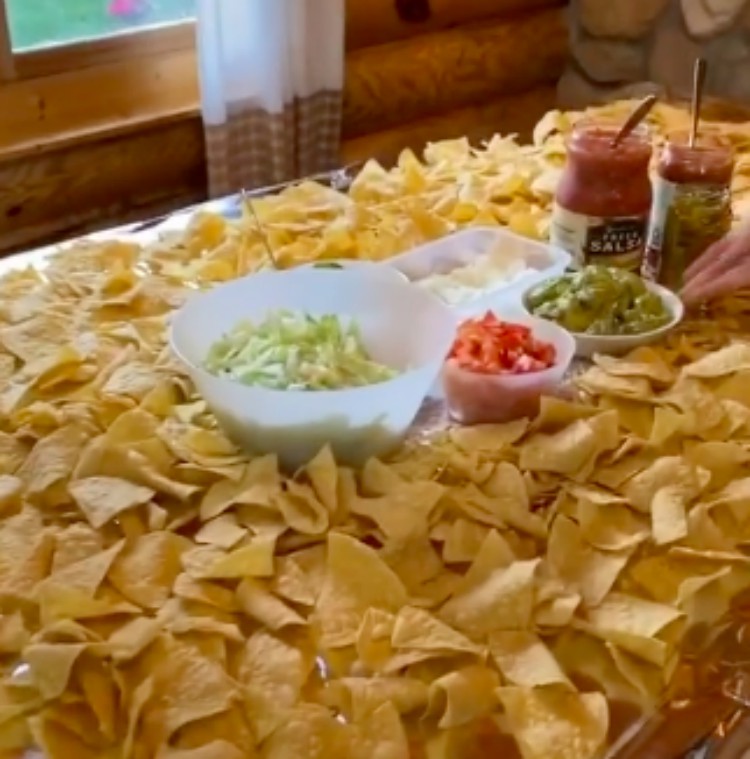 The woman shared a video of the process of making their infamous nacho table. First, a layer of tortilla chips goes down across a full-sized dining room table (with tin foil underneath.). Then, you load up the crevices with all of your favorite nacho toppings—in this case, the family used beef, lettuce, cheese, onions, tomatoes, peppers, salsa and guacamole. Last step: Eat up the nachos surrounded by your whole family!

While it may sounds amazing right off the bat, some people actually think this is pretty gross, especially after seeing it on video. Their argument: You’re eating an exorbitant amount of nachos off a table with the rest of your family grabbing at it as well, dripping guac and queso next to you. Is that even sanitary?

“Sorry, but no,” someone commented on the video.

“The people leaning over the food while they eat and using the other food as a plate would make me too paranoid to eat it,” another person wrote.

“The amount of unsanitary child hands would cause me to leave the entire house,” another added.

Then again there were plenty of people on this family’s side that though the nacho table was an amazing idea: “I’m so mad that my family doesn’t do this,” someone wrote followed by, “This is the best thing I’ve ever seen,” from another.

Check out the nacho table in action below!

We’re not sure what to think! What’s your opinion on the nacho table? Is I too much of a good thing—or completely brilliant? What kind of family traditions do you do with your loved ones during vacation?