Many families choose to take professional family photos on a regular basis. For example, it might be during a family reunion or just in time to get them printed on that year’s Christmas cards.

After getting the photos back from a recent photo shoot, one mom realized that she didn’t get all of the types of pictures she wanted. She has two biological children and one step-son. She wanted a few pictures of just her with her biological children, but they didn’t turn out very well. Her solution was to ask a Facebook group to photoshop out her step-son from the family photos.

This did not go over well on social media.

In her original post, the step-mom explained her request to photoshop her step-son out of the family pictures. It was quickly shared on several social media sites.

This mother of the year from r/iamatotalpieceofshit

Many people were socked at the step-mom’s request and shared how sad her post made them feel for the step-son. For example, Reddit user AnonymousChikorita wrote, “This genuinely made me sad. Imagine how that child felt. I bet he noticed he wasn’t included like the other two.”

Other people told stories about similar situations that happened to them. For example, Reddit user smsjohnson2 explained, “This happened to me – i’m 30 now.Family were discussing the upcoming family photos, and my sister suggested we move the date so I could be involved too. My step-mum said it was “for family only”, and said it was best to leave it as it was.”

After her post went viral, the step-mom tried to explain what she meant and claimed that she regretted her post. She also acknowledged that she knew there was nothing she could do to explain her intentions without making it sound bad. 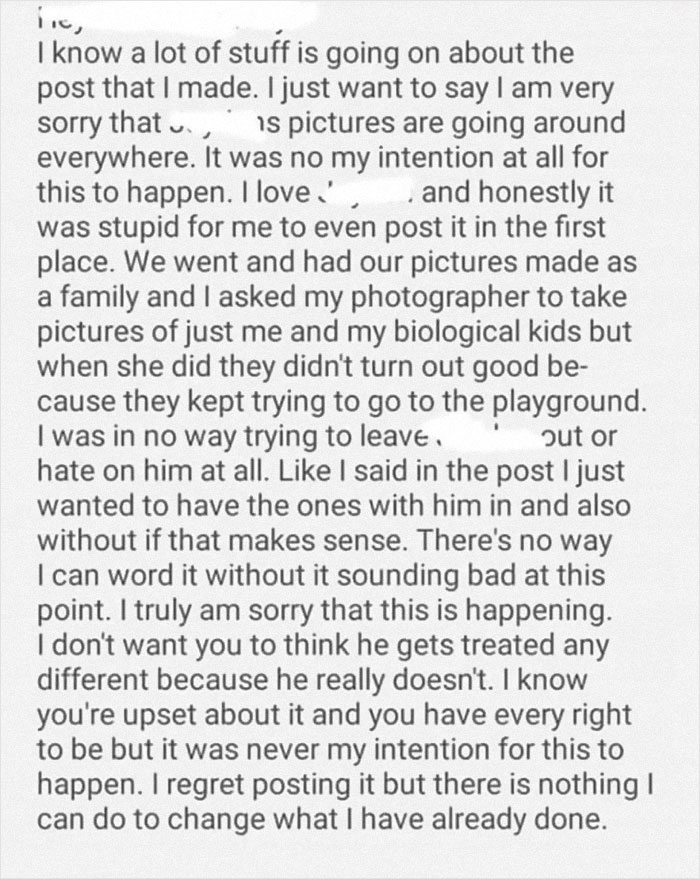 Bored Panda interviewed the biological mom who said that she didn’t find out about the post until several days later, and initially she felt “pissed.”

The biological mom also worried that the step-mom’s post made her look bad, and she wanted to make sure the world knew that she loved her son. She commented on the viral post explaining, “I just want everyone to know that my son is loved very much by my side of the family, and this was the first time in 6 months seeing his father.”

Over time, the biological mom’s reaction changed, and she isn’t mad about the post anymore. She was surprised at the support she and her son received from friends, family and strangers on the internet. She told Bored Panda, “I’m really happy about this situation, because of all the support me and my son are getting through this situation.”

The biological mom has some great advice for anyone who is planning on marrying someone who already has children. “Get to know the children before you get married. Build a relationship with them. And if your not willing to do that—Do Not Marry Their Parent.”

How would you react if your son’s step-mom wanted to photoshop your son out of family photos? Do you think there’s anything the step-mom could do to redeem herself in this situation?