Finally, the holiday season is upon us. That means cutting down a Christmas tree, drinking eggnog by the gallon, oh yeah, and wading through the tons of holiday cards that come in the mail each year.

Most of us enjoy getting these cards—right? We get to see adorable pictures of our closest friends and family and see how everyone has progressed over the last year. Look at Tommy’s growth spurt—he’s grown at least six inches! And wow, how exciting that Monica scored first place in the science fair. Just wonderful news!

All right, so while it’s nice to get a life update, the humble bragging on card after card about everyone’s kids can become a little, well, frustrating. What if your kids aren’t excelling as much? What if you didn’t have as many accomplishments as a family this year? The truth is, reading everyone’s highlight reel can sometimes feel a little like a slap in the face.

The reason is because that’s just what Christmas cards are: Highlight reels. No one is going to tell you the bad stuff that happened throughout the year, even though we can guarantee, if you have a household full of kids, that there were, in fact, bad things that occurred.

One mom named Lisa Allen knows this feeling well. She was having a bit of writer’s block as she gathered materials to write out her Christmas cards for the year. With three kids ages 3, 9 and 18, it sometimes felt like Lisa had more downs than ups—and that’s completely normal.

But then it hit her—why not just be real and focus on what’s really going on in her family’s life instead of trying to pick out the small wins that might just sound like bragging anyway? After all, a non-ideal life is probably closest to what everyone else with kids is experiencing too—it’s just that many are scared to admit it. 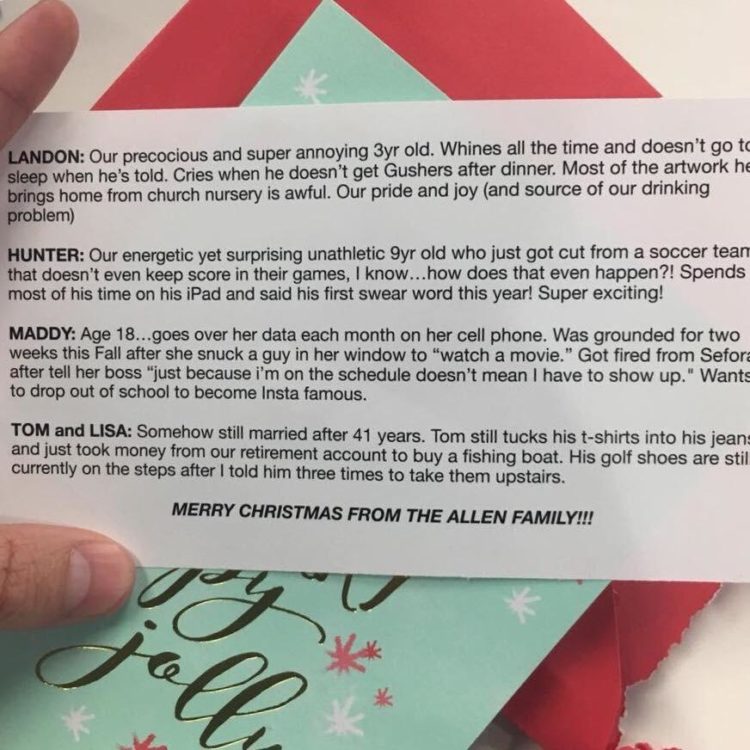 Once Lisa changed her mindset, the words started to flow and before she knew it, she had updates on all three of her children. Spoiler alert: It wasn’t traditional. In the best way possible.

Lisa begins her card talking about her youngest, Landon, or as she refers to him, “our precocious and super annoying three year old” who “whines all the time and doesn’t go to sleep when he’s told.” She even goes so far as to say his artwork is “awful” and that he’s the “source of our drinking problem.”

Next up, middle child Hunter, who “just got cut form the soccer team” and “spends most of his time on his iPad.” He even “said his first swear word this year,” which Lisa refers to as “super exciting!”

The 18-year-old, Maddy, of course, has the longest description, documenting everything from going over her cell phone data to that time she tried to sneak a boy in her window.

Lisa even includes a paragraph about her and she and her husband Tom, who are “somehow still married after 41 years”—especially shocking after Tom took money from their retirement account to buy a fishing boat and never puts his shoes away even after being asked to several times.

Honestly, the card is incredibly humorous and way more in line with what most people experience in a year, and we really appreciate her honesty!

What do you think—are you a fan of brutally honest Christmas cards, or ones that just spout out the highlights? Would you ever send out a card like Lisa’s?