There are few things as difficult for a parent than saying goodbye to a child who is going to serve in the military. It doesn’t matter what role they’re going play, whether they’re in training or in action, or where they’re stationed – to not know where your child is or how they’re doing is terrifying. Conversely, one of the most amazing feelings for a military parent has to be seeing your son or daughter, safe and sound, with your very eyes.

The only way that feeling can get better? If it’s a surprise!

This military mom got just such a surprise by her solider son, and the video of her reaction is enough to have us tearing up. When Jared Johns was temporarily on leave from his station in Germany, he decided to go home in style. What better way to come home than by giving your family a surprise to remember?

The Johns family was spending the day at the scenic Falls Park Bridge in their hometown of Greenville, South Carolina. With beautiful views all around them, the family decided to stop and take a group picture on the bridge.

Clearly, the photographer was in on the surprise, because he’s working hard to take up time! He stalls by getting the kids to look forward, fiddling with the camera, and asking the family if they were ready multiple times. You can see the mom in question is a little annoyed by this drawn out photo, but they all go along with it and continue to pose and smile for the camera. 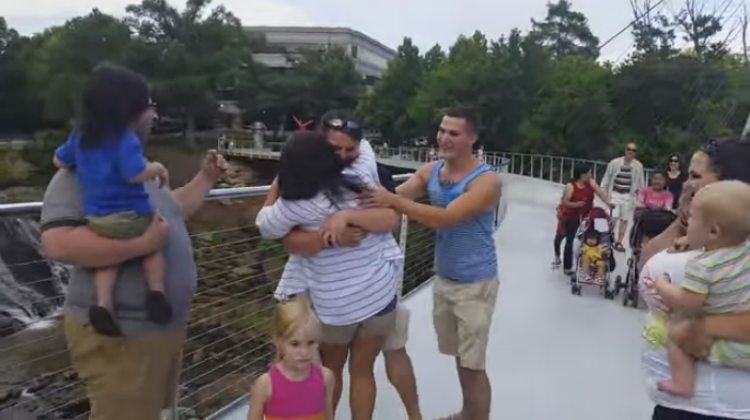 Kevin Johns
Suddenly, the photographer says, “Hold on, we’re missing somebody.” When the family asks what he means, he just says he doesn’t know, and they look around at each other, very confused.

All of a sudden, we see Jared running up behind his family! Admittedly, I was wondering where in the world he was hiding. Jared comes up behind his mom and puts his arm around her shoulders.

Grinning, he asks, “Do you mind if I get in this picture with ya’ll?”

His moms’ reaction is the best thing you’ll see all day. It is nothing short of a movie moment! Jared’s mom turns to him and after a beat of pure shock screams at the top of her lungs! It’s such a natural, completely organic reaction, which is what we love so much about this moment.

Then, of course, the crying begins. For almost the rest of the short, touching video the mother and son are embracing tightly, with mom bawling and saying, “Oh my God!” on repeat. The family is beaming all around, obviously thrilled about Jared’s appearance. We wonder if they knew what the solider son was planning to do all along.

Even the crowd passing by on the bridge is beaming at the beautiful reunion, clapping at the sight of a mother being reunited with her brave son.

We would like to take a moment to thank all soldiers like Jared for leaving their families to bravely serve our country and to thank all the military families for their bravery as well!

What do you think of this touching video? Share your thoughts in the comments section below.