Man Planted 6,000 Trees As a Tribute When His Wife Passed Away 15 Years Ago

When we meet our soulmate and marry them, we never want to picture what life would be like without them.

That was Winston Howe. He had the perfect life. He married the love of his life, Janet, in 1962 and the two of them did everything that you’d imagine a happily wed couple would do, including having their son and buying their home in a English farmhouse amid beautiful rolling fields in Gloucestershire.

There, the happy family resided, until their 30th anniversary when sadly Janet passed away from a heart attack at the age of 50. It was a tragic day for the family, to say the least.

Winston had no idea how he would carry on without his wife by his side. But somewhere along the way, he came up with an amazing idea.

We all grieve in different ways. This man grieves his late wife by visiting her grave every single day. But Winston’s way would be in the form of new life—plant life, that is.

To honor Janet’s life, Winston decided to plan not one, not two, but 6,000 oak trees in a field near their home. Not only would this act as a tribute for his wife, but it was a place where he and his son could find peace on the especially hard days where they missed Janet the most.

Perhaps the most amazing part of all was the arrangement in which Winston planted all of these trees. Inside the forest, he hid a meadow that was shaped just like a heart.

There’s more: He purposely made the point of the heart point to the village that Janet grew up when she was younger. 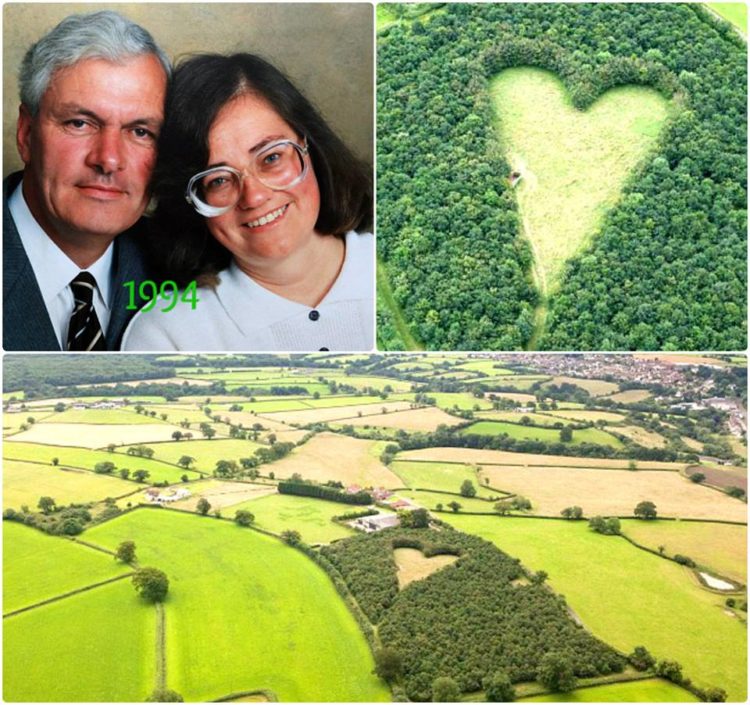 And there’s even more: Winston eventually grew hedgerows around the heart, so that every spring, bright yellow daffodils would sprout up in the middle, really making the heart, and consequently Janet, in some form, come alive.

With the exception of his son, no one knew that this heart-shaped meadow, or the 6,000 trees, existed. Winston wanted to keep it a secret for himself and his son to honor Janet.

And a secret it was for about 20 years–until a hot air-baloonist named Andy Collet discovered the meadow shaped like a heart while he was floating in a balloon in the sky one day.

He was totally amazed by it. “You can just imagine the love story. I have my own balloon and am quite a regular flyer, but this was the most amazing sight I have ever seen from the sky,” Andy said.

Winston visits the meadow frequently to reflect on he and Janet’s life together, and all of the memories they shared. “It is a lovely and lasting tribute to her which will be here for years,” Winston said.

Through he’s still saddened by the loss, having the meadow there really helps him deal with his feelings, knowing how much Janet would’ve loved it. Hey, they call it a labor of love for a reason, right?

How amazing is this unique tribute this husband made for his late wife? Have you ever seen anything like this before?