Kids Who Do Regular Chores Are Reportedly More Successful As Adults

Ever recruit your kid to take the trash out? Fold the laundry? Sweep the floors? While some parents feel guilty making their kids do their daily chores, experts say it can actually have a positive effect on their success later on in life.

Here’s the thing: Chores are something that all adults have to do. It’s not something all adults WANT to do necessarily, but they have to get done nonetheless. So when you teach kids the importance of washing dishes and the like at a young age, they’re more likely to develop a deeper set of understanding in adulthood. At least, that’s what expert Julie Lythcott-Haims, former dean of freshmen at Stanford University and author of How to Raise an Adult, tells us.

“By making them do chores — taking out the garbage, doing their own laundry — they realize I have to do the work of life in order to be part of life,” she says in her TED talk. “If kids aren’t doing the dishes, it means someone else is doing that for them. And so they’re absolved of not only the work, but of learning that work has to be done and that each one of us must contribute for the betterment of the whole.”

She also says that children who grow up doing chores actually become better employees once they establish a career. And she’s not the first one to call out this fact. 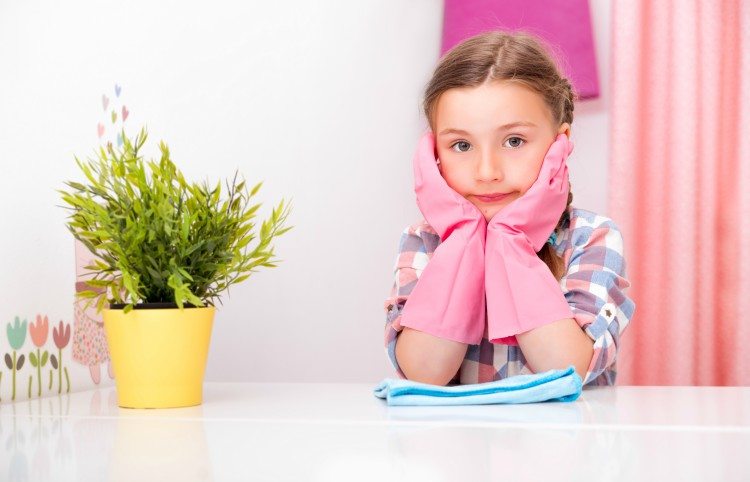 Marty Rossmann of the University of Mississippi used data collected over 25 years to see whether chores done when a child is 3 or 4 could affect them positively when they were in their 20s. The answer? Yep! She found that the kiddos who helped to sweep Cheerios off the ground or scrub off caked-on tomato sauce from a dinner pot were more likely to have more successful careers as well as relationships. It also gave them a sense of gave them a sense of empathy as adults.

The problem is that many parents don’t make their kids do chores—only about 28 percent of adults, according to a survey by Braun Research in 2014. They felt that their kids were already too busy in school and extracurricular activities and didn’t wan to burden them.

Experts say chores, however, are vital. Adults are busy too—and kids need to learn at an early age how to balance all the things that life can throw at them.

“As we become more prosperous as a society, we have expected less and less of our children,” says Nicholas Long, director of the Center for Effective Parenting at Arkansas Children’s Hospital. “What’s happening is that we’re sending them off to college and they don’t know how to wash their clothes, cook a meal, sometimes even basic things like how to change a lightbulb, because we do everything for our children too often.”

So instead of feeling guilty, you can ensure that you’re doing right by your child by making them do chores!

Do you make your kids do chores? How do you make sure they get them done? Did you know that chores had such an impact on kids as they get older?