Nothing bad ever happens when you agree to pay it forward. Whether it’s leaving a bigger tip than necessary, leaving a nice note on a stranger’s car, or even just holding the door for someone, doing a good deed for someone is never a bad thing— and one South Jersey resident just proved that to be true.

Ruth Reed, a retired teacher, made a resolution three years ago to pay a stranger’s bill at her local Wawa convenience store in Medford, New Jersey, at least once a week. One day, it paid off for her in the biggest way.

She was in line at Wawa on Friday night and a customer a few people in front of her turned to the lady behind him and asked her if she could spare $5, since the card he was using didn’t go through.

Ruth overheard the conversation and stepped in to help, since it was her day to pay it forward anyway. Plus, he looked a tad familiar to her . . .

Ruth said the man thanked her and asked for her name. She told him it was Ruth, and, in polite fashion, asked him his. When he answered, “Keith,” she realized who it was that he looked like: Keith Urban! She told him he looked like the country singer, and to her surprise, he said, “I am Keith Urban.”

Ruth scoffed at first—I mean, wouldn’t we all if we really didn’t believe there was a celebrity in front of us whose snacks we just bought? She asked him where his wife Nicole Kidman was, and who the lady he was with was. 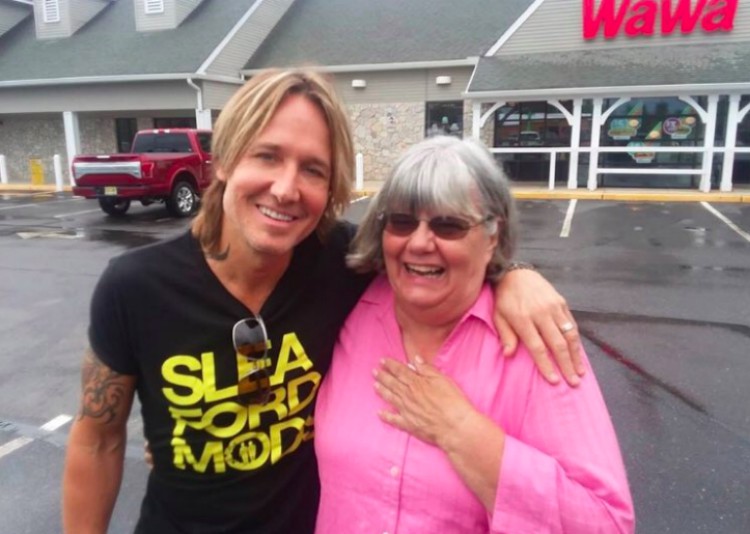 Luckily, Keith Urban, who was on his way to play a sold out show at BB&T Pavilion in Camden, New Jersey, was patient and thought the whole thing was pretty humorous. He answered that Nicole was at home and the lady he was with was his sister. He then told Ruth that she was free to ask his body guard for confirmation that it was really him.

That’s when Ruth felt totally embarrassed. “It was then I realized what an idiot I was,” she wrote in her now viral Facebook post.

The funniest part about it? She noted that he didn’t look like he had a lot of money so she was really happy to help him out.

“He really could have said, ‘Lady, get away from me,’ and he didn’t, he was very kind,” Ruth said.

Ruth says that this resolution she’s made to pay it forward each week really helps her feel better about herself, and hopes she makes other people feel good too—even big country music stars!

Meeting Keith Urban actually got Ruth into the music scene again. Though the last music concert she was at was nearly two decades ago — the Spice Girls! — she recently bought tickets to an upcoming show.

To hear an interview with Ruth herself about this hilarious encounter, check out the video below.

Have you ever ran into a celerity that you didn’t recognize? Do you ever pay it forward the way Ruth does?