What would you do if you saw a bear in your backyard? Probably run away, right?

Well, let us ask you another question: What would you do if you saw a bear chilling in your pool drinking a margarita? Probably take your camera out—which is just what Mark Hough of Altadena, California did when he found himself in this insane situation. And no, we can’t make this stuff up.

It all started one recent summer day when Mark was just lounging outside when he heard some strange noises, like leaves and sticks rustling, in his backyard.

“I got up, looked over in the bushes and lo and behold there’s a bear climbing up over my fence,” Mark said.

So like any human being, he went back inside his house because who is actually going to try to tell a bear he isn’t welcome to their home?

Anyway, when Mark looked outside the window, the bear was now fully in his backyard and making his way towards his pool. Clearly, the California heat was getting to him, because he got right in and started to take a little swim all by himself.

Instead of panicking or wondering why a friggin’ bear decided to go for a dip (well, he does live near the Angeles National Forest, after all), Mark grabbed his phone to get the whole occurrence on tape. Duh, this is 2018.

The bear was totally living life. He swam around the pool like a true champ, ducking his head in and out of the water, and was just totally having some me time—much needed, since we’re sure he’s very busy sneaking into garbage cans and all that. 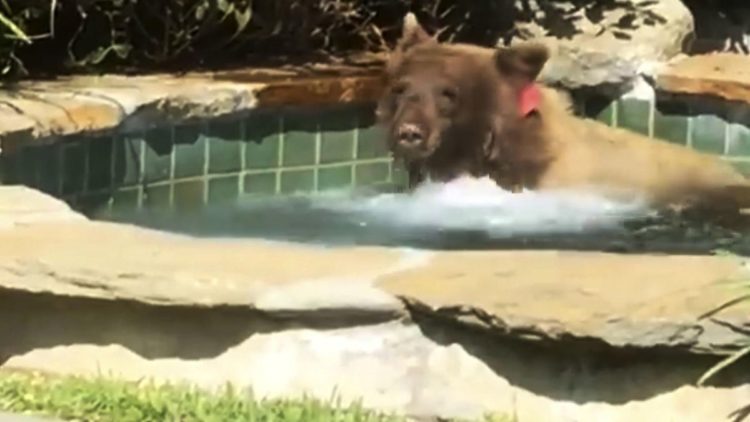 Actually, he’s probably completely over eating garbage, because after he went for a swim, the bear did the unthinkable and began to lap up some of the leftover margarita that Mark had abandoned near the pool when he went inside. That’s right, the bear was trying to get a little buzz going.

Truly, this bear and I are totally kindred spirits. This is the type of summer day I aspire to have every single day and I honestly just respect him for his action.

After the bear’s grand old soak in the pool and some sips of margarita, he eventually took off. I would’ve guessed to a local bar for another drink, but Mark says he later saw him in a tree taking a nap—he clearly needed to shake off all the fun with a relaxing snooze.

“He was playing having a grand old time,” Mark said. “So he had his margarita, he had his jacuzzi, and now he’s ready for an hour nap.”

One social media user summed up this amazing moment in one tweet: “A bear wandered into a California man’s hot tub, drank his margarita, then took a nap — and it’s clearly having a better summer than you.”

You really have to see it to believe. Luckily, you can! To watch the bear in action, check out this amazing video below.

What do you think of this bear chilling in the pool? Do you think he totally nailed a relaxing summer day? What would you have done if this happened to you?