Some women struggle with the natural process of aging, dreading it like the plague. Yes, it’s true that the body changes and we notice it, but it would be a sad thing to feel invisible.

That is how Ms. Bev was feeling. Drawn in by Christopher Hopkins’s book and makeover videos, Bev decided to visit the one and only Makeover Guy in person. In her own words, she worked up the courage to do so because he and his team make everything look so fun. She’s right!

During her confessional, she expressed that she reached a point in her life where she felt invisible. Taking stock of her appearance caused her to want to make a change. And she had a whole lot going in her life including a new retirement, an upcoming 60th birthday, and her daughter’s wedding.

Phew! Bev admitted that she did not want to embarrass her fashion industry daughter on her big day. Talk about pressure! With so much on her plate, she could definitely use some pampering. As the song “It’s My Turn” fittingly plays in the background, you can’t help but root for her. Go Bev! Go Bev!

In the video, we see Christopher playing with Bev’s old hairdo before giving her a stylish new color and cut. The deep chestnut brown and layered bob hairstyle frame her face beautifully, and you can finally see her wearing a smile. 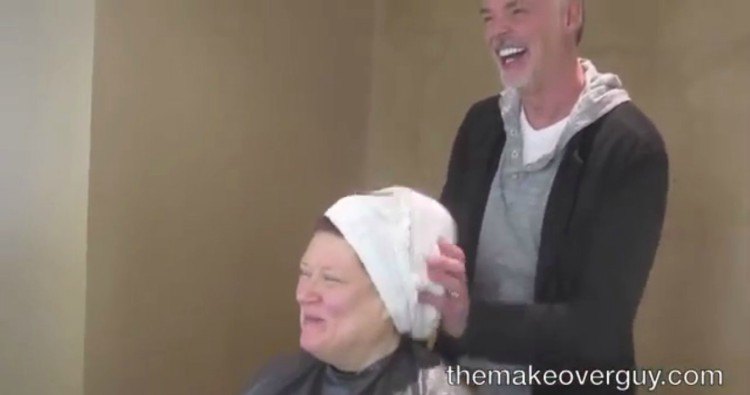 Invisible? Not. We understand that society often ties beauty to age, making some women question how attractive they are based on a number. Though outward appearances alone won’t provide the inner fulfillment that many seek, it can sometimes be a boost to a woman’s self-confidence.

In Bev’s case, she felt that time was up for her old way of caring for her skin and hair. A makeover tailored to her present self was a welcome shift for all the changes occurring in her personal life. Once Bev sees her transformation, she can hardly believe it’s her. Watch her reaction as she gazes in the mirror!

Funny enough, she mentions she wished she would’ve gotten a makeover sooner, but the present is certainly the right time. She doesn’t recognize herself once her makeover is complete. For Christopher, Meryl Streep was the first thing that came to his mind when his work was done and we have to say he’s not far off. Can you see it?

When Christopher whipped out those phenomenal skills of his, he helped Bev to realize her own beauty she felt was invisible. Christopher was the right guy for the job, and he and his team brought out the radiance in this sweet lady that exploded when she saw herself in the mirror. This makeover definitely lifted her spirits.

Hopefully, she’ll never feel like she’s fading into the background, or that her daughter wouldn’t be proud. For any woman out there who might be feeling the same way, remember age ain’t nothing but a number!

What do you think of Bev’s makeover? Can you relate to her sentiment of feeling invisible?