Normally when a burglar makes a visit to a home, his motive is to steal—steal your money, steal your jewelry, steal any valuables this person can get their hands on. The victim usually calls the police, the robber is caught, and serves his punishment. Right?

Well, apparently it doesn’t always happen like this. A man named Nate Roman recently had his home in Marlborough, Massachusetts broken into—but the scenario went a totally different way than we’re used to.

The moment Roman got home on May 15, 2019, he felt like things weren’t the same way as he left it. His instinct told him that someone had been in his house.

Naturally, he instantly was worried that something was stolen, so he began to search around. And while he was able to confirm that indeed someone had been in his home, nothing was taken.

In fact, to his surprise, he found that the beds were made, the rugs were vacuumed, and all his toilets were freshly scrubbed—the toilet paper roll even had origami roses on them! I mean, what a lovely burglar this must have been.

Well, Roman didn’t think so, however. He called the incident “weird and creepy” when he reported it to his local police department who have been trying to track down the intruder since it occurred. 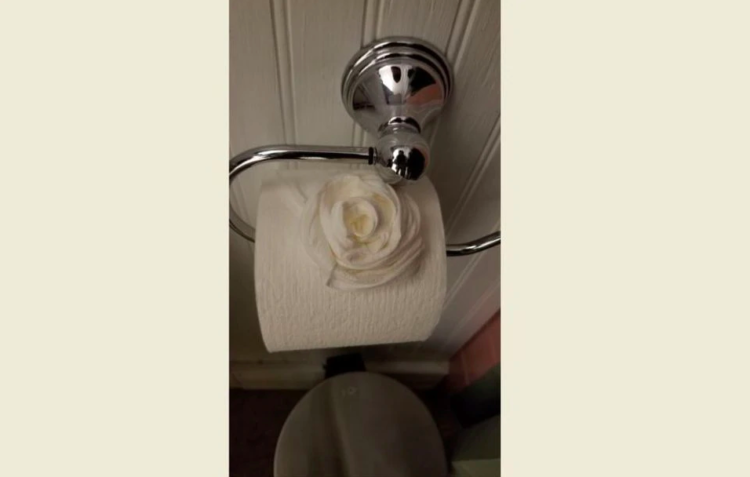 After several days, Roman and the police are still totally unsure of who did it. “We have not received any reports similar to this in other locations, and we have no suspects at this time,” Marlborough Police Sergeant Daniel Campbell.

One theory? Perhaps a housekeeping service mistakenly entered his home instead of their client’s and accidentally gave Roman a free cleaning. Definitely sounds like it could be the case. And if so, maybe the service will come back in a few weeks and clean his home again!

Roman says that he’s able to laugh about it now, but at the time it happened, he felt more spooked than anything else. “It’s funny now, but didn’t feel funny at the time,” Roman said. “I kept the toilet paper roses as souvenirs.”

Weirdly, this isn’t the first time someone entered a home uninvited and didn’t steal anything. On May 6, 2019, a woman named Cheyenne Ewing allegedly broke into someone’s home in Hamden and did the weirdest series of events.

The woman sat down on the couch like it was her own, gave the dog a few pats on the head, and then got up to do all of the dishes. Then she just walked out like nothing ever happened.

So we’ve got one “burglar” who just wanted to tidy up someone’s house, and another burglar just wanted to play with a dog. We supposed we’re glad there are more strange burglar events than scary ones!

What do you think of this strange breaking and entering incident? Do you think it was an accident or intentional? Do you have any weird burglar stories? We’d love to hear them (so long as no one was hurt!).