Typically, when we think of judges, we might think of some brutally ruthless people. I mean, have you ever watched Judge Judy? Sure, she’s hilarious, but man, she is one tough cookie. You definitely want to make sure that you’re completely innocent if you’re ever in her courtroom.

Okay, or really anyone’s courtroom. Judges don’t go light on you—if they feel you need to be sentenced for a crime, then they’re going to do it and not feel bad for you.

However, sometimes you come across judges with a heart. One man found himself before Judge Frank Caprio when he got a speeding ticket. Judge Frank Caprio has a reputation for having a little, er, fun with the people who enter his courtroom.

The man was charged for going 35 in a 25 mile per hour zone. Doesn’t seem too crime-worthy, but the trial still starts off a bit rocky. The man tells the judge that he’s only been driving in the U.S. for six months and previously had a license to drive in Africa. When he was driving, he didn’t see any signs for a speed limit and just assumed that it was around 30 or so. Fair! (Well, in our non-professional opinion.)

However, after asking the man if he knew how fast he was driving, Judge Caprio reminded him that if there are no posted speed limits, the speed limit is 25 miles per hour—and that if he took his licensing exam, he should’ve known that. The man admitted he did read that before.

When the man tells the judge that his wife and two babies were in the car with him and that they were in attendance at the hearing, the judge invited them to come up to the stand. 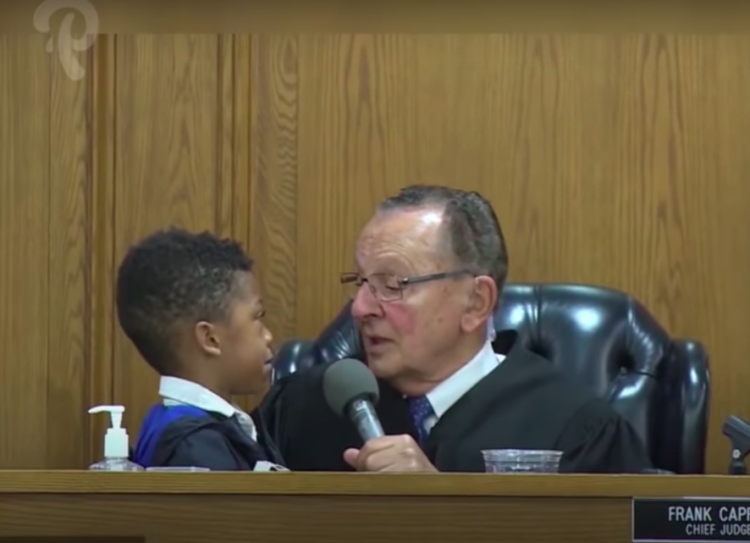 When he asked the wife about why she didn’t ask her husband to slow down, she said that she didn’t feel like they were going very much above the speed limit. “Just a little bit over?” the judge jokes. Man, this is definitely not going well.

Well the trial took a turn when Judge Caprio called one of the little boys, who was in the car when the speeding ticket happened, up to the stand. The judge was about to put his father’s fate in this little tyke’s hands.

The judge was very gentle and calm with the little boy, and explained to him that they were talking about his father. He asked him to tell him whether his father was “guilty” or “not guilty.”

The little boy’s brutally honest answer sent the whole courtroom into hysterics—even Mom and Dad didn’t know what to think.

You can probably guess what his answer was. But what you won’t believe is how understanding this judge was in the end of it all.

To see how the rest of the trial played out, check out the video below.

Can you believe this little kid’s answer to the judge’s questions—or how sweet the judge’s reaction was to it?