Ah, the infamous school dress code. We don’t know about you, but we certainly bent a rule a two when it came to fashion choices in our teenage years. After all, cute threads snagged from weekend mall trips rarely fell into the ‘school-ready’ category!

With that said, not every dress code is created equal; in fact, the rules can vary so much from school to school, that it can be hard to keep them straight. Take the case of Fisher Middle
School, for instance. This California junior high is starting to get a lot of attention—and not for its academic achievements.

You see, Tony Alarcon, a father of one of its students is absolutely convinced that this school’s strict dress code is actually objectifying the seventh and eighth-grade girls, a claim that has gotten his mission quite a bit of support.

The trouble started when Dimitra, Tony’s daughter, and 13-year-old Fisher Middle Schooler, was told by a teacher that she had to go to the office because her outfit of choice was, in the words of the school official, “distracting to boys.”

Once in the office, an administrator called Tony and requested that he deliver a school-appropriate outfit for his daughter to change into, but even after he arrived at the school, clothing in hand, Dimitra still was not cleared to go back into the classroom.

In an interview with local news station KPIX, the father recalls his frustration. “I brought her a change of clothing which included a tank top with spaghetti straps and shorts,” Tony says. It sounds like a reasonable choice, but, once again, these items were rejected because the pants did not have a 4-inch inseam, something that is stated in the school’s dress code.

Upon reviewing the written rules for himself, the dad came across a trend in the code that worried him—almost each and every one of the policies singled out female students. It’s something that Tony fears may cause “emotional issues” for his impressionable 13-year-old, as well as her classmates.

“[The dress code] can cause them to question their bodies or feel like they’re sex symbols at 13-years-old, ‘cause they’re not—they are just kids,” Tony asserts.

Since the initial incident, the dad has taken to a local Internet forum to gather support for his cause. There, his story has been met with some pretty evocative statements, including this one… 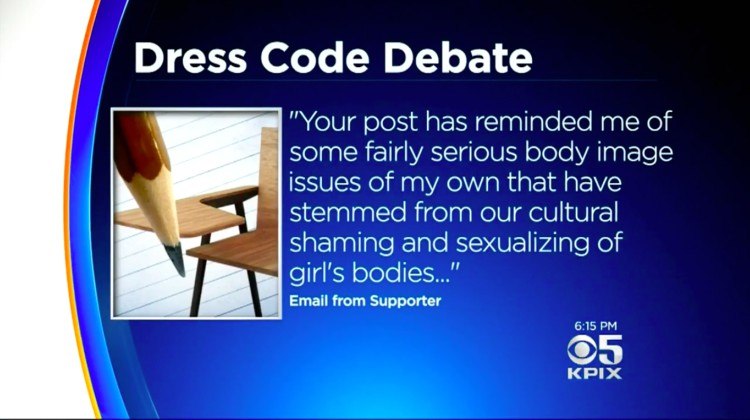 CBS 5 SF KPIX
At the moment, Tony’s grievances are still being assessed by school officials, but he has high hopes that his daughter will be able to rock her favorite threads in the classroom in the near future.

Talk about a contentious issue! To meet both Dimitra and her dad, and see the ‘incriminating’ outfit for yourself, be sure to watch the video below.

We’d love to hear your take on this dad’s dress code crusade. Do you think that Dimitra’s outfit was inappropriate for school? Have you ever fought a similar fight on behalf of your child? What are the ‘right’ clothes for kids to wear to school?