Pregnant Mom Went Into Labor On Halloween, And The Doctor Who Delivered Her Baby Was Dressed As The Joker

Virginia Cha 10News
Halloween: It’s one of the most fun holidays, isn’t it? Whether you’re a fan of getting all the free candy or the idea of getting frightened in a haunted house, it’s hard to not feel excited the entire month of October.

Though there are so many things we love about Halloween, we’d have to say that dressing up in costume is one of the best parts of the holiday. Who doesn’t like to pretend to be something they’re not for one day? Whether you put on a pointy hat and call yourself a witch or go all out with skeleton face paint, seeing all the creative costumes really makes the holiday.

While kids get the biggest rep for dressing up, it’s totally an adult holiday too. Maybe you’re accompanying your child trick or treating or preparing for the ultimate costume contest at a haunted happening—either way, it’s truly a holiday unlike any other that people of all ages can enjoy.

One of the best parts of being an adult on Halloween, however, is getting to dress up for your job. If you work at a company that allows it (and most do), it’s fun to sit at your desk in something other than boring work clothes—you know, like as your favorite movie character.

One doctor, Dr. Paul Locus, took this to the next level. On Halloween, he came to the hospital where he worked dressed up as the Joker from Batman. 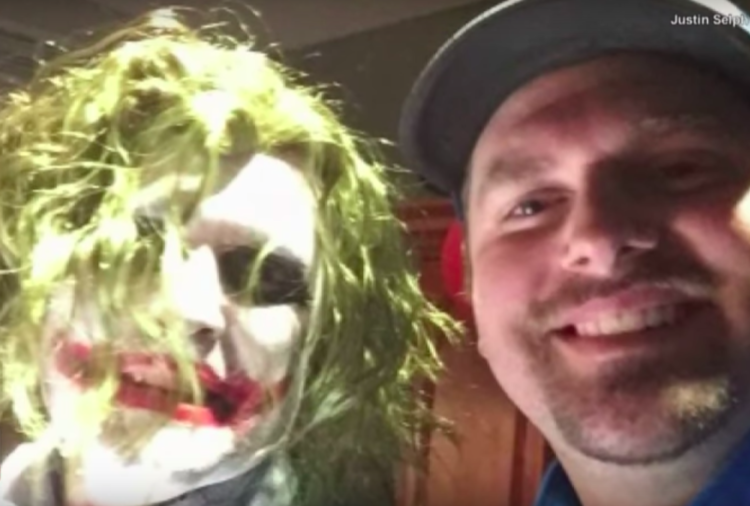 The costume was super spot on, complete with the classic purple jacket the Joker is known for, the epic white face paint and smudged red lips, and even a scraggly blond haired wig. In fact, if we didn’t know any better, we’d say this doctor was the actual real life criminal mastermind!

That’s fun and all for a costume contest, but remember, this Joker wannabe was actually a doctor. And on this particular day, he had a baby to deliver.

While some parents might be a little freaked out by someone dressed as the Joker delivering their baby, the particular parents-to-be that were about to give birth actually kind of loved the idea.

Even though Dr. Locus promised to go home and change before delivering, the parents suggested that he actually not do that. That’s right—they literally told him to keep on the spooky costume for the big arrival of their baby!

Dr. Locus did as he was told, and delivered a healthy baby girl to the parents on Halloween night—still decked out in his full-on Joker gear.

To hear more on the story and see photos of Dr. Locus delivering in costume, check out the video below.

How appropriate! Something tells us this child is going to grow up to be the biggest Halloween lover.

Would you ever let someone dressed as the Joker or any other spooky character deliver your child, on Halloween no less? What do you think of the idea these parents had to let their doctor keep on the creepy gear instead of a standard hospital gown?