If you thought Justin Bieber could dance, you might give it a second thought after you watch him get schooled by toddlers.

The singer recently appeared on James Corden’s Toddlerography segment on his hilarious show The Late Late Show with James Corden, where mini humans appear as dance instructors for both Corden and his celebrity guest.

Celebrities such as Jennifer Lopez, Gwyneth Paltrow and Kate Hudson have all appeared on the hilarious segment before, as they try to mimic adorable toddlers’ dance moves as they lead in front of them.

Justin Bieber’s debut did not disappoint. As the two waited patiently for their dance instructors to meet them on stage, Bieber took note of how nervous Corden looked.

In walks a little tyke no older than five or six walks in and gives a little wave. “Are you ready?” she asks, implying that she’s about to get down to business.

And boy does she—and all her other mini dance instructor friends.

As Bieber’s hit “Baby” plays, he and Corden try and keep up with the toddler choreographers’ dance moves, but it’s hard. Corden was right—they really don’t mess around! 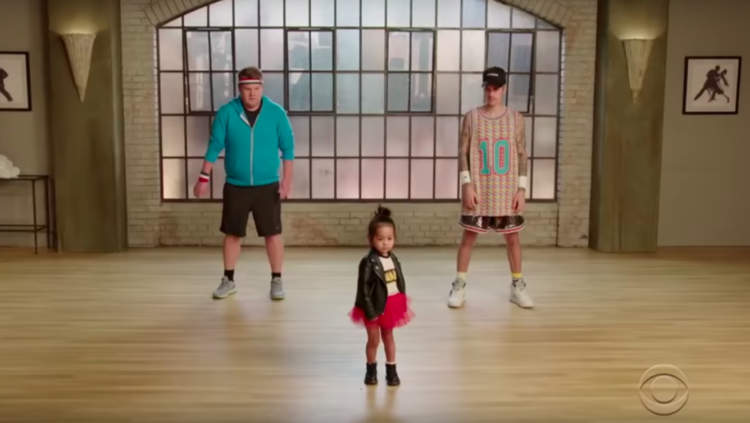 The toddlers were doing everything from flossing to cartwheels and every kind of twist and turn you could think of, while Corden and Bieber tried to follow suit. Key word: Tried. Even Bieber, a skilled danced, was having a hard time keeping up (and Corden didn’t even attempt the cartwheel!).

When it finally ended, Corden was so winded that Bieber had to tell him to take some deep breaths before proceeding to blow bubbles with one of the “teachers.” Adorable, if we do say so ourselves.

Corden is known for quite a bit of musical performances on his show. His most popular segment is called “Carpool Karaoke” where he drives around with a famous singer and sings all their best hits with them. Of course, there are lots of jokes thrown in as well. (P.S. Celine Dion and Paul McCartney are our favorite segments.)

In addition, Corden sometimes performs a segment called Crosswalk the Musical, where he and a theatre troupe perform songs in real crosswalks in real time. Yes, that’s right, he and his crew galivant on the streets without bypasses knowing beforehand. Sometimes they’re pissed, but it makes for some pretty amusing entertainment though! Check out the time he really took it to a new level and went to Paris to perform songs from Les Misérables.

Obviously, Corden is a pretty funny guy. Check out he and Bieber’s dance moves when directed by toddlers below.

How hilarious is this segment? Who do you think is the better dancer