The Late Late Show with James Corden via YouTube

If you’re a fan of “The Late Late Show with James Corden” (and the Beatles for that matter) you do not want to miss this episode, if you haven’t seen it yet. James headed to Liverpool, England for his Carpool Karaoke segment to spend the day riding around with the one and only Paul McCartney. Just a casual day in the life, right?

The day begins when James takes Paul down Penny Lane, which of course, is symbolic to one of his songs. The two jam out to “Penny Lane,” for a super happy and joyful start to the episode.

However, the mood totally takes a turn when Paul tells James about one time years ago when he saw his late mother in a dream of his, who told him that things were going to be okay and to “let it be, and that was how his song “Let it Be” was born. Paul was of course, pretty choked up telling this story.

“That’s the most beautiful story I’ve ever heard,” James said in response. It truly was—and wat was more beautiful was how right after, the two began to sing along to “Let it Be,” right then and there.

Suddenly the song had a totally new meaning: “When I find myself in times of trouble, Mother Mary comes to me, speaking words of wisdom, let it be.”

During the song, James seemed okay, but when they neared the end, he began to wipe away tears from his eyes. “It got me emotional there…it’s too much for me,” he said. 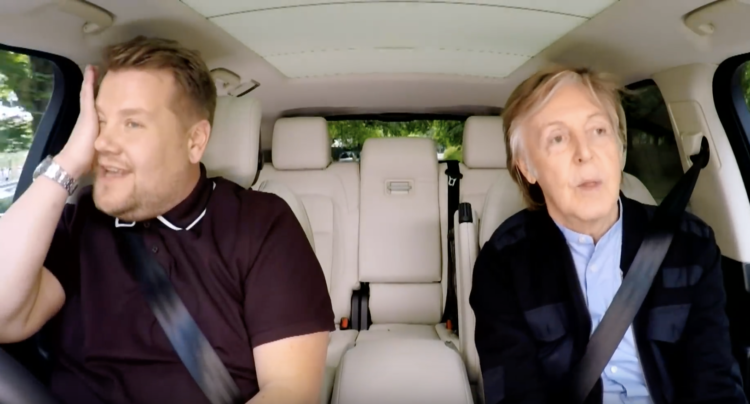 The Late Late Show with James Corden via YouTube

At first we thought he was tearing up because of the emotional backstory of how it was written, but James went on to say: “I can remember my grandad who’s a musician and my dad sitting me down and saying ‘we’re gonna play you the best song you’ve ever heard.’ And I remember them playing me that. If my grandfather were here right now he’d get an absolute kick out of this.”

Oh man, now we’re crying too! To quote the one and only Paul McCartney: “The power of music, it’s weird isn’t it?”

The video continues with the two singing to a range of the best Beatles songs, from Drive My Car to Blackbird, and Penny Lane. Other songs such as When I’m Sixty-Four and Hard Days Night were sung by the two during their trip to McCartney’s childhood home and then a local pub where lucky fans everywhere got to see him break it down in person.

These Carpool Karaoke shows are always such a hit, but this one, in just a few days, the video below has almost 20 million views! It’s certainly not one to be missed, especially if you’re a Beatles fan.

Take a listen and sing along to all your favorites below (and try not to get emotional!):

What do you think of this special episode of The Late Late Show with James Corden? Did you tear up when James did, or at any point in the video?