What would you do if you caught your child doing something really disappointing—like making fun of someone who has cancer?

One dad got a call from school about his 16-year-old who was making fun of a classmate of hers who had lost all her hair from chemotherapy—even pulling off her wig—and he couldn’t believe his ears. He knew he had to punish her in an extreme way.

“Apparently there is some pre-existing bad blood between the two of them, but I don’t think that even begins to excuse her behavior,” he wrote in a message forum as background. “Not how I’ve raised my daughter to treat people and it truly disgusted me to hear how she acted.”

Dad goes on to say that his daughter “showed no remorse,” he said. “She tried to excuse her behavior by saying the girl in question deserved it.”

But dad wasn’t buying that. He gave her two options of how she’d prefer to be punished—and they were both pretty harsh (but dare we say, deserving).

“I gave my daughter two options: I will throw away every single piece of electronics she owns and never buy her another again (this was just to coerce her into choosing option 2); She will go to the hairdresser and get a cue ball haircut. As in completely shaved head, as bald as the hairdresser can do.”

Well his plan works, and his daughter picked option number two: the haircut. Then dad added on to his punishment: “No wig,” he said. “She has to go to school like that until it grows back.” 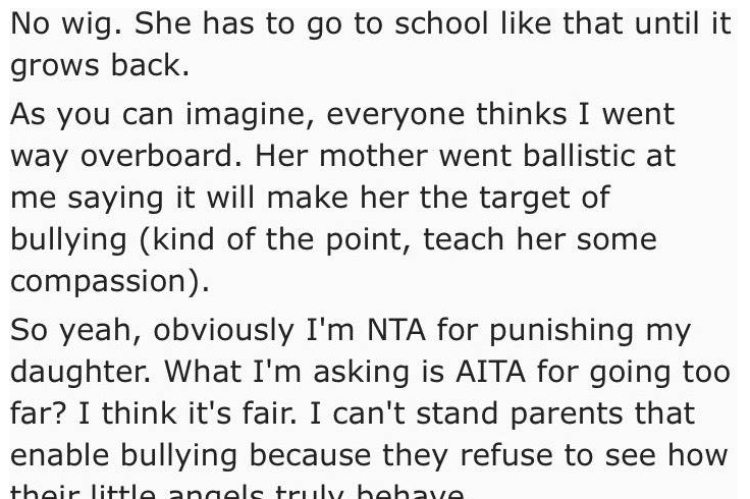 The girl’s mother, Dad’s ex-wife, who doesn’t have custody over the daughter, “went ballistic at me,” he explained, “saying it will make her the target of bullying (kind of the point, teach her some compassion.)”

“I came up with the punishment because I thought my daughter had an extreme lack of empathy for the girl she bullied,” he says, adding that he lost his mother to breast cancer in his 20s, so what she did really hit home for him, and not in a good way.

In the message board, he asked if he was being fair, adding, “I can’t stand parents that enable bullying because they refuse to see how their little angels truly behave.”

But then there were those who patted him on the shoulder, praising him for how he reacted to it. “This is an appropriate punishment for that behavior that will hopefully result in one child being compassionate and thinking empathetically before they start bullying people,” someone else wrote.

Where do you stand on Dad’s punishment for his daughter? Do you think he went overboard, or do you think this was the perfect punishment for making fun of someone with cancer? We’d love to hear your opinion on this!