Gender reveal parties have become all the craze these days, even sometimes replacing a traditional baby shower altogether. A gender reveal gives expecting parents a fun way to tell their family and friends the gender of their impending baby.

That’s exactly what Joe and Leela Krummel of Minneapolis, Minnesota did for their gender reveal party. They thought of the idea to open up a box of balloons that would signify if they were having a boy or girl—if the balloons were blue, the baby was a boy and if the balloons were pink, they’d be expecting a girl.

Well low and behold, Leela, who was four months pregnant at the time, nearly lost it when she opened the box with her husband only to find a slew of multi-colored balloons come out of it.

After a loving kiss and a moment of excitement, the two opened the box and balloons of all different colors flew out. There was a single blue balloon in there, sure—but the other colors were a mix of purple, yellow, green, red, orange…

The two stood utterly confused and upset staring at the multicolored balloons in horror while friends and family stood back and laughed at the silly moment. Leela looked on the verge of tears (we feel you, mama, it’s just the hormones!). 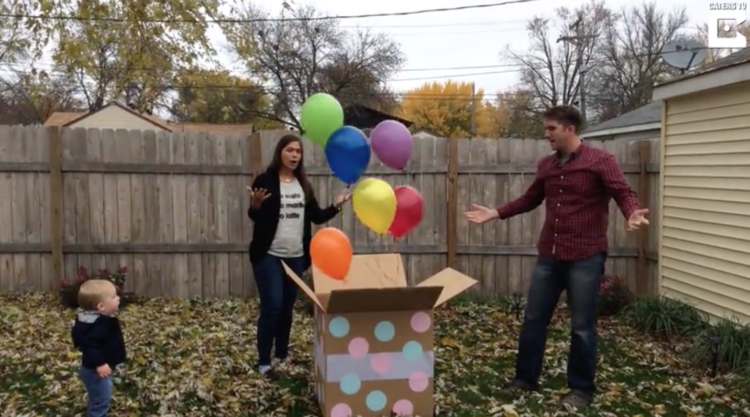 The thing is, they sort of had a feeling something like this was going to happen. When they were placing the order for the box of balloons, the people at the store didn’t quite understand the concept of a gender reveal.

“Nobody at the party knew the gender, including us,” said Joe. “Before opening the box we were nervous because the store didn’t seem to understand the concept of blue for boy, pink for girl, but they reassured us it would be done properly. But when we saw the multi-colored balloons we were so disappointed, not only because 30 people were staring at us in confusion but because we couldn’t find the card in the bottom that had the gender written on it.”

Later, the couple found out that the store was under the impression hat they were supposed to hide the card with the baby’s gender in a secret compartment in the bottom of the box. We’re not quite sure what the point of that would be, but that is definitely not how this works.

Thankfully, the two had some pretty great friends and family in attendance. One friend looked deeper in the box to find the card with the gender on it. They used some of the balloons that Leela and Joe had used to decorate the home for the party to stage a real gender reveal—they way they planned it in the beginning.

Even though some of their guests knew before them what the sex of their baby was, this unique story just makes it all the more special.

Watch the video below for the hilarious mix-up moment—and the moment the two finally got to find out what gender they’re having!