If you’re married, you probably know the feeling of loving someone so much—and also being completely annoyed with them at the same time.

It’s a tricky thing trying to cohabitate with someone. Whether it’s the way they chew or how they put their feet up on the coffee table, there are just some things that may always really irritate you. It’s only time until you want to just smack your spouse across their head!

Despite all quirks, we have to say: Nothing is worse—and we mean nothing—than when your spouse rips one in bed. You know what we’re talking about, right? Farts. Flatulence. That smelly gas that comes out of your behind. Must they do it in the same place where you sleep?

Okay, so we know that when you get married, you commit yourself to another person for better or for worse. But does “worse” really have to mean letting it all out on the clean sheets? Of course you’re going to love them through it, but man, is it annoying (not to mention stinky).

If you know this feeling, then you need to see this video. In a hilarious 20 seconds, we witness a dog sleeping soundly—he even has a little derpy smile on, probably dreaming of playing with his pup friends or eating all the kibble. Somewhere in his happy dreamlike state, he lets out a massive, smelly fart. 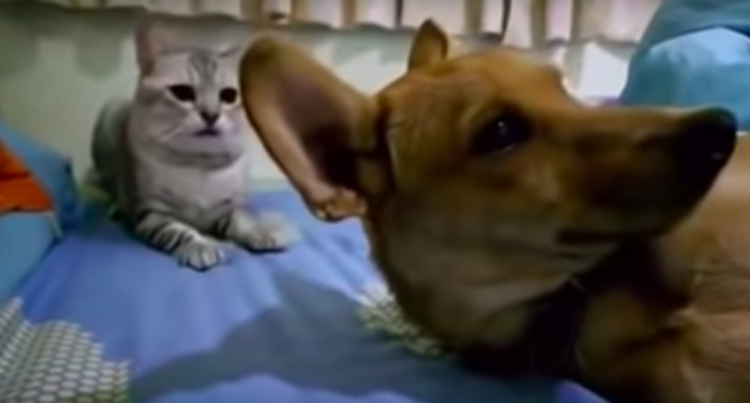 It would’ve been fine if he was sleeping in private, but a dainty kitty was trying to share a bed with him and witnessed the whole thing. Her little kitten ears! How dare this pup try to stink up her nighttime kitty beauty routine. So rude.

Though it looks as if the kitten hesitated, she decided she had to show the dog who was boss. A few seconds after he farted in bed, she lays it on him—a mega cat punch, right on the head.

The dog doesn’t know what hit him—literally. He awakes from his sleepy stance and looks around confused. When he doesn’t see the kitty, he lays his head back down to go back to sleep. Ah, success on the cat’s part.

One of the viewers totally nailed their comment on the video: “Marriage in a nutshell,” they replied to the video. Brilliant.

In fact, part of the humor of the video comes from some of the comments people have left on it.

Some have offered up their own funny captions: “When she remembers something you’ve done 4 years ago.”

And some just can’t stop laughing at all the amazing details of the video: “The post-fart squint as the smell reaches the cat is priceless,” they wrote.

But most people just can’t stop talking about how funny the video is. “I keep laughing because the cat looks deeply offended,” someone else commented. “Couldn’t let it go…unlike the dog.”

See for yourself in the video below—we guarantee you won’t be able to watch it just once!

How hilarious is this video? Can you relate to this scenario when it comes to your spouse? What would you caption it?