If you’re looking to plan a fun vacation for your kids, you’ve probably checked out Universal Studios in Florida. The theme park focuses on the entertainment industry, with characters and rides all themed to animated movies and television shows.

At the park, you might into anyone from Dora the Explorer to The Simpsons characters and Scooby Doo himself.

If you’ve ever seen the movie Trolls, you’re probably familiar with the some of the popular characters in the flick, including Poppy, Branch, and Guy Diamond. The three have just joned the ranks at Universal, and Troll fans are pretty excited about it.

But there’s a surprise that one of these characters have up their sleeves that we never quite expected. It’s an action that happens in the movie, but the fact that Universal workers really made this happen in real life is a bit, well, interesting.

We’re just going to spit it out: The Guy Diamond troll character is actually completely butt naked and will be farting glitter at guests. Yes, you read that right. We said “farting glitter” in the same sentence.

“GUY DIAMOND is our resident ‘naked glitter Troll,’ with heaps of body confidence and a unique idea of personal space. He is a party on two feet,” DreamWorks said of the troll.

Guy Diamond and the rest of the trolls will be at the park on the weekends at KidZone, near the E.T. Adventure exhibit. Besides tooting some sparkles (because how many times can we write “farting glitter”?), Guy and his troll buddies will be dancing to songs from their movie while saying hello to fans. 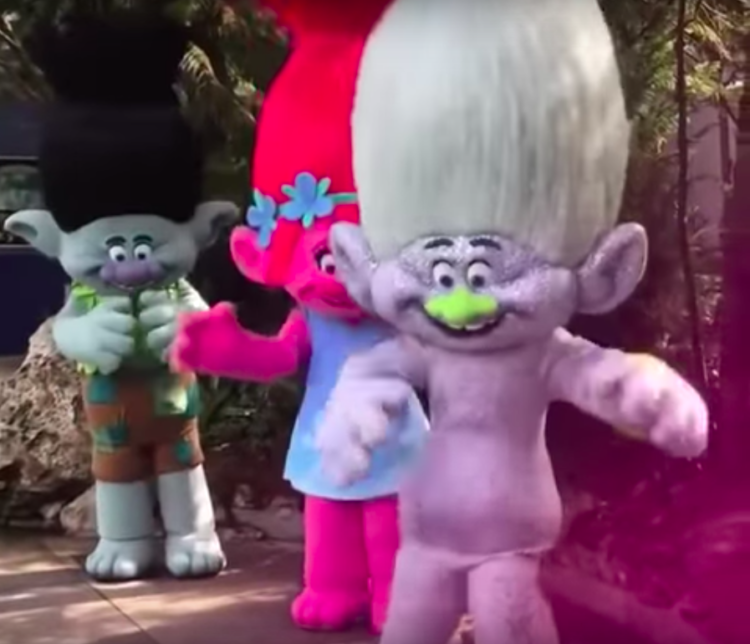 Naturally, there are some mixed feelings about the gassy actions of Guy Diamond. Twitter blew up (no pun intended) after the news erupted (sorry, we can’t help it) about the farting troll.

“Thank you @UniversalORL for squashing what was a growing desire to visit your parks again. I love your Harry Potter spaces, but there is no way you’re getting a dime of my family’s hard-earned money if you think a naked glitter-farting-Troll roaming about is acceptable,” someone who absolutely hates the idea of the troll wrote on their Twitter.

And yet, there are many who think it’s brilliant.

“Glitter farts are not only amazing but help make boring pieces of art into masterpieces!” someone wrote.

Some are kind of torn on the whole thing. “I hate the troll that farts glitter but I appreciate Universal for making me feel something again.”

And some are just focusing a lot on the aesthetics. “I’m very uncomfortable with how sculpted his butt is.”

Guess we’ll all just have to head to the park to see what all the commotion is about!

If you’d like to get a little sneak peak about how the glitter fart all goes down, check out the video below!

What do you think of Guy Diamond, the farting troll at Universal? Are you offended or intrigued?