If you’ve ever gone camping, you’ve probably been fearful of seeing a bear. Most people deem bears to be scary creatures that lurk in the forests—ones that if you get too close, it could be detrimental.

However, bears actually have many similar instincts to humans. If you’ve ever seen an animal doing a human thing, you probably understand what we mean. It’s one of the coolest things to witness!

For example, take this bear that one man found lounging in his Jacuzzi. At one point, the bear even got out of the pool to have a sip of the man’s margarita! He was clearly having a grand old time.

We’ll bet that bear was single and ready to mingle—but when you’re a mama bear (like a mama human), you want our kids to be the best version of themselves. And to get there, they need to be able to have fun and interact with others. That’s why we, as humans, set up play dates with others or make sure they play nicely with their siblings.

Well, the same goes for mama bears. That was made apparent in a recent video thanks to the family who looked out their window and saw a mama bear and her five cubs playing on their backyard swing set! 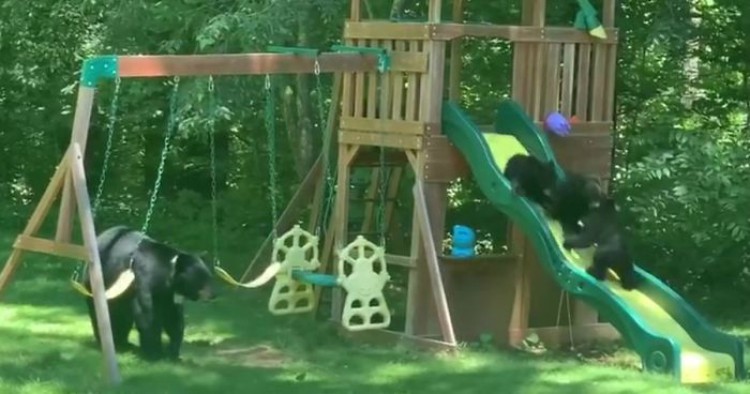 Just like the kids who play on that swing set every day, the cubs were doing it all the same—swinging on the swings, playing on the slide…they honestly looked like they were having a ball! And of course, mama bear is right there beside them to make sure they don’t get hurt.

“This was taken in our backyard,” the family explained. “It is supposedly a mom and five cubs, two of which are suspected to be adopted from a different litter.”

The family who captured the video lives in Asheville, North Carolina, which is known to see upwards of 200 bears per year. In fact, seeing a bear in your backyard isn’t all too uncommon in the area! People have reported seeing them anywhere from swinging on their backyard hammock to splashing in their pool.

To see the video of the mama bear and its cubs playing adorably on the swing set, check out the video here.

How cute are these cubs? What would you do if you saw a bear in your backyard? What about a bear family playing on your swing set?