Angry Mom Goes Off on Babysitter Who Quit Because She Was Getting Paid $2.50 an Hour

It can be hard to put the trust of the care of your child in the hands of a total stranger. Finding a good babysitter is hard. And it doesn’t come cheap—the average hourly rate for a babysitter is $16.75 for one child and $19.26 for two kids, according to a 2019 UrbanSitter study.

Somehow, even based on these statistics, one mom was getting away with paying her babysitter just $2.50 an hour. Yes, that’s right—under $3 per hour to care for her children. (Note that the federal minimum wage is $7.25 an hour!)

The babysitter was so fed up being so underpaid that she decided to quit—but the mom was not exactly happy about that and refused to give her any more money. She took to Facebook to vent about the babysitter’s decision to leave:

“I am LIVID,” she began. “[NAME] has been babysitting for me for seven months now, $100 a week. The hours are easy (9am-5pm, like a regular job) and the kids are basically angels, they sleep most of the day at this age.”

The mom went on to explain that the babysitter texted her one day telling her she can’t afford to work for her anymore under the low pay, and she’s going to apply to Walmart instead.

“Have fun working longer hours for LESS PAY you ungrateful b*tch,” the mom wrote in the post.

She continued to vent about how she’s now “stuck without childcare” and that all the daycares in the area are “super expensive.” She also says that every time she posts an ad, people respond by leaving her mean comments.

Well, yes, when you offer to pay $2.50 an hour to care for live humans, no one is going to be very enthusiastic.

“I’m getting desperate. I can’t believe she’d put me in this spot,” the mother continued, “This is risking my livelihood. I thought she was my friend! 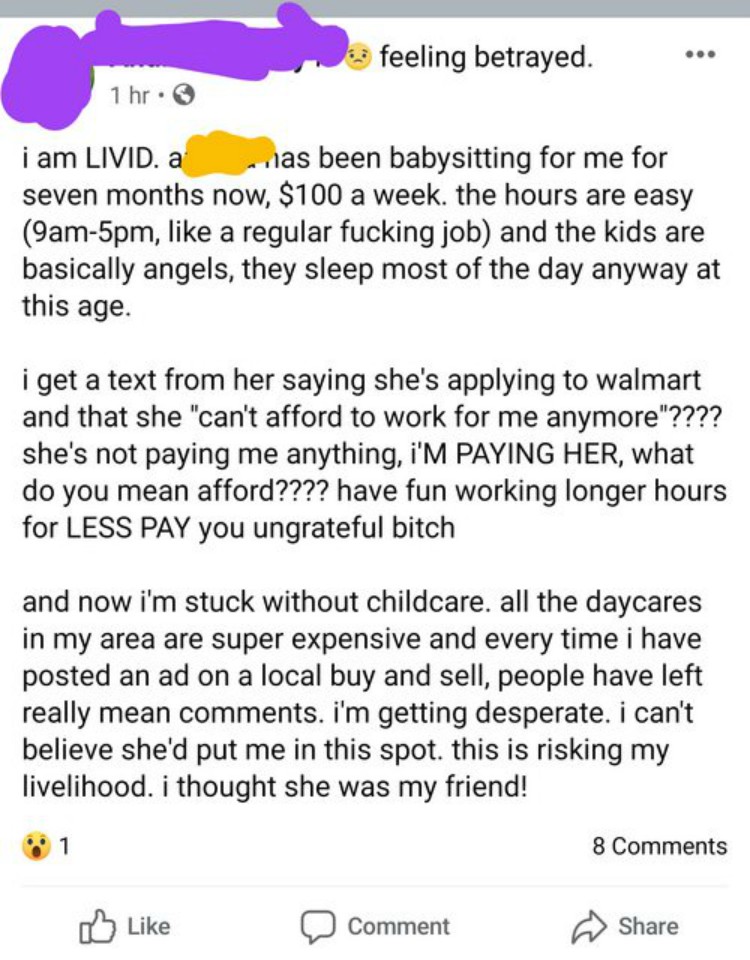 Naturally, the Facebook post was not met with much sympathy. People informed the mother that her ex-babysitter will certainly make more money at Walmart (since it would be extremely illegal for her not to), and that she was being completely unreasonable.

To top it off, the ex-babysitter got a hold of the mother’s Facebook account (even though the mother thought she had blocked her) and got a kick out of everything.

She responded saying that she would not only make more money at Walmart, but that she could also work fewer hours to do that, and couldn’t have to deal with her “WHINY kids that scream HALF THE DAY.” She also informed her the job has benefits, something she was obviously not being offered while babysitting.

“You are rude and entitled,” she ended it. “Your kids deserve better.”

The mother had some choice words for that response too, but they’re a little too harsh for our fresh eyes. You can read the entire post and exchanges between the two women on this Reddit post.

Can you believe this woman felt it was okay to pay someone $2.50 an hour to watch multiple children—and then lashed out like this? Do you have any crazy babysitting stories under your belt?