Sometimes finding out the gender of your child is a simple trip to the doctor’s office. Sometimes it’s an over-the-top gender reveal with a cake-cutting or a smoke bomb. And sometimes, it’s in the most heartfelt, genuine, tear-jerking way possible.

Enter: Jennifer Jones-Prothro, who, at 38, is expecting her ninth child. Each previous child she’s had, Jennifer has always found out before giving birth what the gender was. However, her father, Charles, would always ask that she and her husband James not tell him because he liked to be surprised when it happened.

“My dad always wanted to be surprised by it,” Jennifer said. “There are not many surprises left in the world these days.”

Sadly, Jennifer’s dad passed away before Jennifer got pregnant with this child after a battle with cancer. They were extremely close, so initially, Jennifer wanted to be surprised by this baby’s gender in honor of her father. However, her friends insisted on throwing her a themed shower, so Jennifer decided it was best to learn the gender.

But she didn’t want to just hear it and be done with it. She asked James if he’d be able to do some kind of creative gender reveal; one she hasn’t seen a million times before (seriously, how many pink or blue balloons can we see pop out of a box?).

A pretty hefty favor, but James came through—and came through real well. As a music producer, James has an at-home recording studio so an idea developed. He and Jennifer had saved voice messages from Charles, and James decided to utilize them in the most bittersweet and creative way using his music producing skills. Get ready for all the tears. 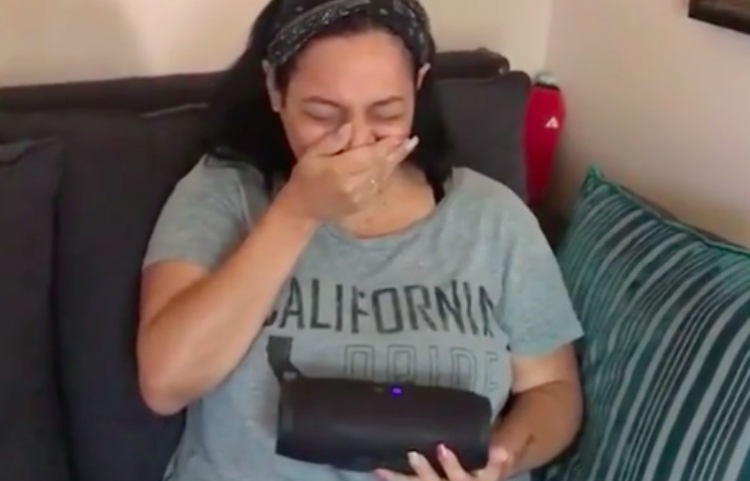 James took bits and pieces from various voice messages and pieced them together in a way that could audibly tell Jennifer the gender of their child.

When James was ready to give her the gift, he told her that he had a special video to share with her and her family about the gender. He sat his wife down in front of their family and handed her the speaker. Jennifer was clearly excited to learn the gender but had no idea what she was about to hear.

“This is the most special, creative way I could think of to tell you the sex of our child, but I couldn’t do it without a little help,” James starts off the recording.

Then, all of a sudden, the voice changes to Charles, Jennifer’s late father: “Hello, Jenny, this is your father. I want to let you know that it is a girl.”

Jennifer immediately covered her mouth in shock and burst into tears—and honestly, so did we. Not only did James exceed her (and everyone else’s) expectations on a creative gender reveal, but it was truly heartwarming to watch.

“The last person I expected to hear was my dad,” Jennifer said. “I wouldn’t have wanted to learn it any other way.”

To watch the clip in full, check out the video below (oh, and grab the tissues—you’re going to need them for this).


What do you think of this sweet video? What are your opinions on gender reveals?